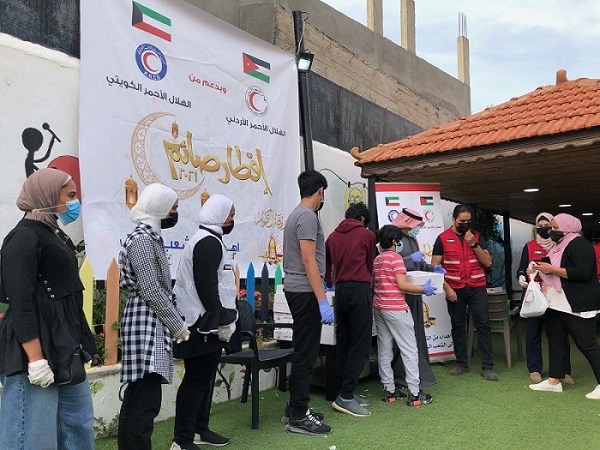 Amman (UNA-OIC) – Kuwait Red Crescent Society (KRCS) launched the iftar project, which includes the distribution of meals to 15,000 Syrian refugees in Jordan throughout the holy month of Ramadan.

During the distribution process that took place at the Jordanian Red Crescent Center in Balqa Governorate, Kuwaiti Ambassador to Jordan Aziz Al-Daihani told KUNA that KRCS has continued to provide humanitarian support to Syrian refugees in Jordan since the outbreak of the Syrian crisis in 2011.

Al-Daihani added that the State of Kuwait is keen to alleviate the suffering of refugees and provide them with basic needs, taking into account the conditions in which they live, and committing to the moral and legal role towards them. He noted that these official and popular Kuwaiti efforts are nothing but a practical translation of the directives of the higher political leadership to support refugees.

The Kuwaiti diplomat mentioned that the iftar project is being implemented by KRCS in cooperation with the Jordanian Red Crescent, and includes the distribution of 500 meals per day among the refugees throughout the month of Ramadan and in various Jordanian cities and governorates with a total of 15,000 meals. He pointed out that a number of Kuwaiti students studying at the College of Medicine in Jordan and Kuwaiti volunteers participated in the daily distribution program.