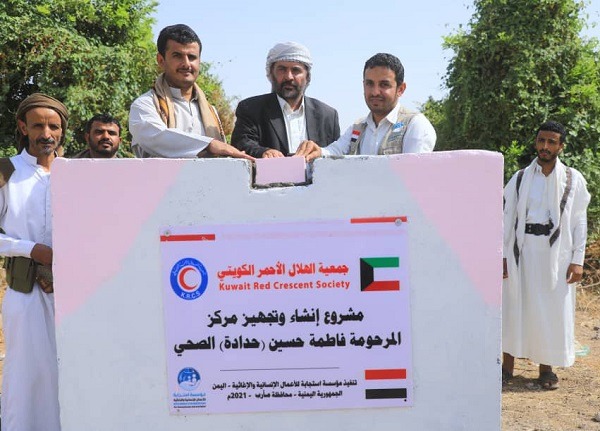 Aden (UNA-OIC) – Kuwait Red Crescent Society (KRCS) on Monday supervised laying the foundation stone for a health center project in Yemen’s Governorate of Marib, the third of its kind in the war-torn country.

Deputy of Marib Governor Abdullah Al-Bakri, in a press statement, appreciated KRCS’s supervision of placing the first stone for the late Fatima Hussain health center project, construction of which was funded by a donor from Kuwait, considering it as a noteworthy contribution to the health sector in Yemen.

For his part, KRCS Director-General Abdulrahman Al-Oun said that the health center would consist of obstetrics, a gynecology clinic, children’s clinic, internal medicine ward, emergency ward, a laboratory and other sections.

In the past two weeks, the KRCS inaugurated the construction of two schools; one named after the Kuwaiti citizen Hamad Abdullah Al-Joaan in Hadhramout Governorate while the other named after Abrar Marzouq Al-Ghanim in Shabwah Governorate, with funding from donors in Kuwait.