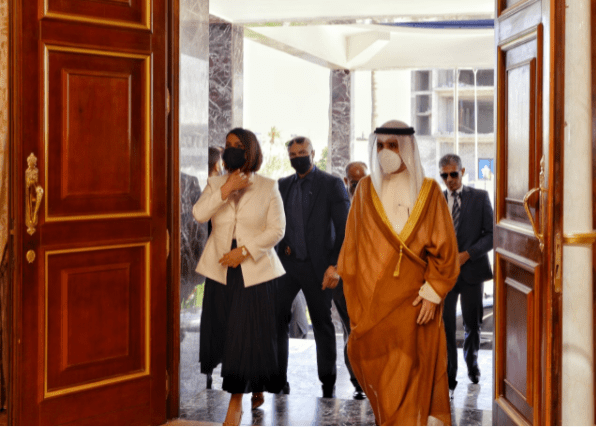 Tripoli (UNA-OIC) – Kuwaiti Foreign Minister and Minister of State for Cabinet Affairs Sheikh Dr. Ahmad Nasser Al-Sabah on Tuesday affirmed his country’s firm support for Libya as it heads towards elections in December, in line with a UN-backed deal after a decade of political and economic turmoil.

In a press conference alongside his Libyan counterpart Najla El-Mangoush, Sheikh Ahmad Nasser Al-Sabah conveyed to her the best wishes of Kuwait’s Emir Sheikh Nawaf Al-Ahmad Al-Jaber Al-Sabah to the Libyan Government of National Unity (GNU), which won the vote of confidence in parliament nearly two months ago.

The Kuwaiti foreign minister wished Head of Libya’s Presidential Council Mohammed Al-Menfi every success as the former diplomat from Benghazi looks to get the war-torn nation’s institutions on the same page whilst steering the country in a path towards free and fair elections slated for 24 December 2021.

He said that 11 vital bilateral deals had been signed in the past to buttress cooperation in a variety of domains, expecting more agreements to be signed soon to meet the aspirations of the peoples of the two friendly countries.

The Kuwaiti minister urged the international community to stand alongside Libya in this critical juncture, which is crucial to preserve the country’s sovereignty and security, as well as to invariably help usher in prosperity and development, as embedded in relevant UN Security Council resolutions.

For her part, Ms. El-Mangoush thanked Kuwait for the unflinching support it has offered to Libya, saying the return of a joint committee for higher-level talks, held in abeyance since 2010, would herald in a new era of bilateral relations.