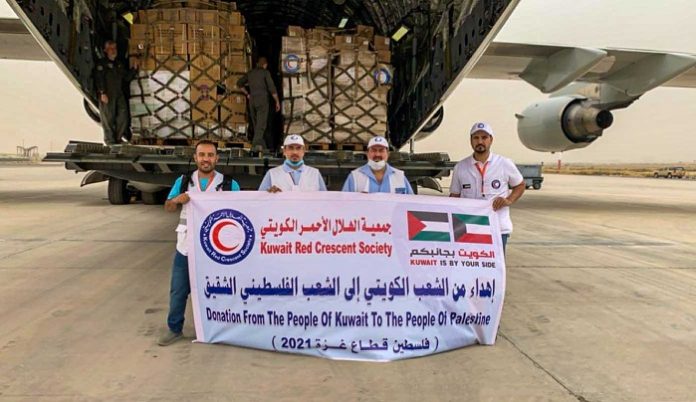 Kuwait (UNA-OIC) – Kuwait Red Crescent Society (KRCS) announced that the first relief plane has taken off from Abdullah Al-Mubarak Air Base, carrying medical aid to Cairo Airport in Egypt, to be delivered to the Palestinian people in Gaza Strip, who are facing difficult living conditions due to the brutal Israeli aggression.

Speaking to KUNA, KRCS Chairman Dr. Hilal Al-Sayer said Sunday that the relief flights of Kuwait’s humanitarian “Air Bridge” to Gaza Strip began today, which is a translation of the keenness of the Emir of Kuwait as well as the Kuwaiti government and people, to support the brothers in Gaza Strip.

Al-Sayer added that the plane was carrying 40 tons of medicines, medical supplies, blankets and wheelchairs, accompanied by a number of volunteers who would go to the Rafah crossing and deliver them to the Palestinian Red Crescent. He noted that KRCS distributed food baskets and two ambulances for the brothers in Palestine over the past days.

The Kuwaiti official pointed out that the KRCS field team will visit the wounded and Palestinian families, whether in Al-Arish or in the Gaza Strip, to provide their needs urgently. He stressed that the Society will not hesitate to provide all kinds of support to the brothers in Palestine.

Al-Sayer praised the Kuwaiti official position, the Foreign Ministry, Ministry of Health and the Kuwaiti Embassy in Cairo for taking practical steps and humanitarian moves to alleviate the humanitarian crisis in Gaza. He also expressed his deep thanks to the Ministry of Defense through the Kuwaiti Air Force, which sent the air bridge to Egypt.

The KRCS chairman underscored that Kuwait “is always proactive in providing relief to the Palestinian people and standing with our brothers in Gaza”. He called for the international community and humanitarian organizations to take the necessary measures to deliver the largest amount of relief and medical aid to the brothers in the Gaza Strip.