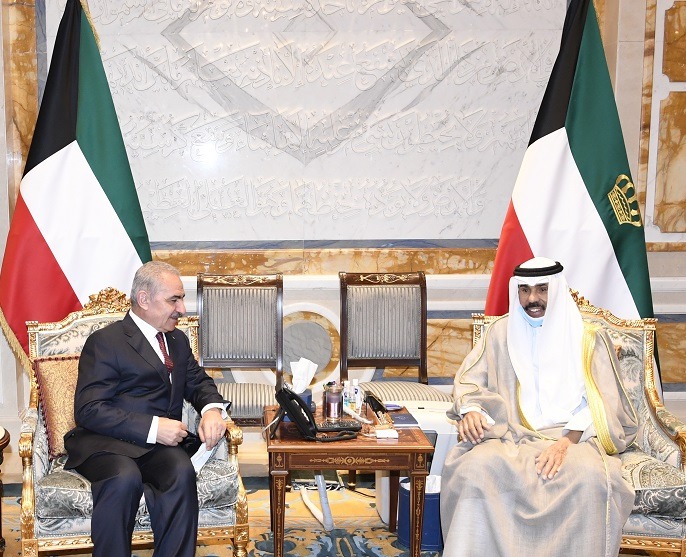 Kuwait (UNA-OIC) – Kuwaiti Emir Sheikh Nawaf Al-Ahmad Al-Jaber Al-Sabah said Tuesday that the State of Kuwait remains unwavering in its stance and support of the just Palestinian cause.

The Emir’s statement came as he received, at Bayan Palace, Palestinian Prime Minister Mohammad Shtayyeh and his delegation, in the presence of Kuwaiti Prime Minister Sheikh Sabah Khaled Al-Hamad Al-Sabah.

Sheikh Nawaf Al-Ahmad reiterated Kuwait’s steadfastness in support of the Palestinian people until they achieve their dream of an independent state with East Jerusalem as its capital, stressing that such lawful aspiration came in line with international resolutions on this matter and the Arab Peace Initiative.

He affirmed that the Palestinian cause was, and still is, the central issue for Kuwait as well as the Arab and Muslim worlds, wishing the Palestinian government and people security, peace and triumph.

On his part, Prime Minister Shtayyeh expressed deep gratitude and appreciation to the efforts of the State of Kuwait, leadership and people, in the support of Palestinians’ aspirations.