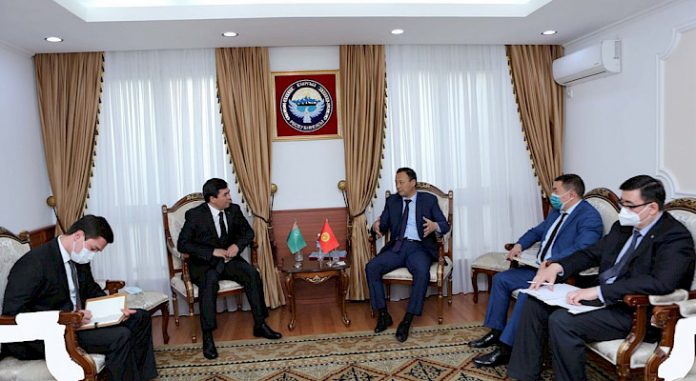 The ambassador of Turkmenistan conveyed warm words of congratulations on behalf of Deputy Chairman of the Cabinet of Ministers, Minister of Foreign Affairs of Turkmenistan Rashid Meredov to Minister Kazakbaev on his appointment as head of the Foreign Ministry of the Kyrgyz Republic, as well as wishes of success in his work at such a crucial time.

During the meeting, Kazakbaev informed the interlocutor about the gradual stabilization of Kyrgyzstan’s internal political situation and the return of political processes to a constitutional track. The minister stressed the commitment of the Kyrgyz Republic to the fulfillment of all previously assumed international obligations.

The sides exchanged views on the state and prospects of bilateral cooperation and noted the importance of further strengthening the strategic partnership and interaction between Kyrgyzstan and Turkmenistan in the political, diplomatic, trade, economic, and cultural and humanitarian spheres. The issues of organizing mutual visits at various levels were also discussed.