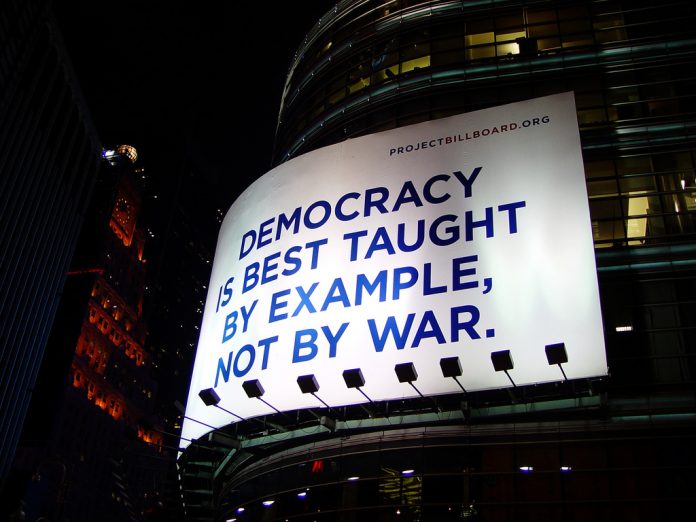 As the U.S. government simultaneously threatens the International Criminal Court for even acting as if it might prosecute the United States for crimes in Afghanistan (a topic “investigated” for years now, while the ICC has yet to actually prosecute any non-African for anything) and (with little apparent cognitive dissonance) uses the implausible claim that the Syrian government might violate a law as an excuse to threaten to violate the supreme international law (that against war) by escalating the killing in Syria, the choice between war and law could not be more stark or critical.

This question will be taken up by many talented speakers and workshop facilitators at #NoWar2018 later this month in Toronto. The conference will focus on replacing mass killing with nonviolent prevention and resolution of disputes. Participants can be expected to agree on that much and little else.

Has law been used more for war or peace thus far? Has it done more harm or good? Should it be a significant focus of a peace movement? Should it focus on local laws, laws on the national level, on tweaking existing international institutions, on democratizing such institutions, on creating a new global federation or government, or on advancing particular disarmament and human rights treaties? No universal consensus, or anything even close to it, exists on any of these points.

But consensus can and will be found, I believe, on particular projects (whether or not there is agreement as to their prioritization) and might be found — and would be very beneficial if found — on broader principles if thoroughly and openly discussed and considered.

I’ve just read James’ Ranney’s book, World Peace Through Law. I find myself in as much disagreement as agreement with the details of it, but in far more agreement with it than with the status quo of Western common sense. I think it’s important that we think through some of the details, and press forward together as we’re able, whether or not we agree on everything.

Ranney proposes a “moderate” vision that stays far short of the utopia of world federalism. Citing the recommendations, now centuries old, of Jeremy Bentham, Ranney writes that “the prospects of adoption of Bentham’s ‘world peace through law’ proposal are almost literally infinitely greater than world federalism being adopted any time soon.”

But wasn’t arbitration, as proposed by Bentham, put into law over 100 years ago? Well, sort of. Here’s how Ranney addresses that in a list of past laws: “Second Hague Convention (outlaws war to collect debt; accepts ‘principle’ of compulsory arbitration, but without operative machinery).” In fact, the primary problem with the Second Hague Convention is not a lack of “machinery” but a lack of actually requiring anything. If one were to go through the text of this law and delete “use their best efforts to” and “as far as circumstances allow” and similar phrases, you’d have a law requiring that nations settle disputes nonviolently — a law that includes a fairly elaborate description of a resolution process.

Ranney similarly, but with less basis, dismisses a law that was put in place 21 years later: “Kellogg-Briand Pact (normative principle outlawing war, but no enforcement mechanism).” However, the Kellogg-Briand Pact doesn’t include any of the hedge words found in the Second Hague Convention, or anything whatsoever about normative principles. It requires nonviolent dispute resolution, full stop. In fact, the “normative principle outlawing war” — on an actual reading of the text of this law — is exactly the outlawing of war and nothing else. Nothing accurate is communicated by tacking on the words “normative principle.” The need for “machinery,” if not “enforcement” (a troubled term, as we’ll see in a minute) is a real need. But institutions of dispute resolution can be added to the ban on war that exists in the Kellogg-Briand Pact without imagining that the ban does not exist (whether or not one accepts the loopholes purportedly opened up by the UN Charter).

Here are the three steps Ranney proposes to replace war with law:

“(3) adequate enforcement mechanisms, including a UN Peace Force.” (“not pacifism”)

Here lies a major disagreement. A UN Peace Force, albeit not appropriately commanded by General George Orwell, exists and has been failing spectacularly since the launch of the war on Korea. Ranney quotes, apparently favorably, another author proposing that this global cop be armed with nuclear weapons. So, that insane idea is new. Ranney also favors the so-called “responsibility to protect” (R2P) the world from genocide through war (without, as is typical, ever clarifying what distinguishes one from the other). And despite the traditional lack of respect for a clear law like the Kellogg-Briand Pact, Ranney offers the traditional respect for R2P despite it not being any law at all: “great caution must be exercised to define very carefully when the new ‘responsibility to protect’ norm mandates intervention.” It mandates nothing whatsoever.

Where does this belief in UN war-making for the cause of peace take us? Places like this (the belief in proper illegal occupations): “Despite the opposition of a recent American president, the use of UN troops to assist nation-building is something that obviously should have happened much earlier in Iraq and Afghanistan, now costing the U.S. trillions of dollars, thousands of lives, and gaining us nothing but the contempt of a large segment of the world.” The identification of “us” with the U.S. government is the deepest problem here. The notion that these genocidal wars imposed costs on the United States worth even mentioning in comparison with the costs to the wars’ principle victims is the ugliest problem here — uglier still in the context of a paper proposing to use more wars to “prevent genocide.”

In fairness, Ranney favors a democratized United Nations, which would suggest that its use of its armies would look very different from how it does today. But how one squares that with occupying Iraq and Afghanistan I cannot say.

Ranney’s support for a global improved-UN war machine runs into another problem raised in his book, I think. He believes World Federalism is so unpopular and implausible as not to be worth promoting any time soon. Yet I believe that handing over a monopoly on warmaking to a democratized United Nations is even more unpopular and implausible. And I agree with the popular sentiment this time. A comprehensive world government able to attempt to restrain the destruction of the environment by homo sapiens is badly needed, while strongly resisted. A war-fighting world institution out from under the thumb of the United States is even more strongly resisted, and a terrible idea.

I think the logic of why it’s a terrible idea is fairly clear. If the use of deadly violence is needed to accomplish some good in the world that cannot be accomplished nonviolently (a very dubious claim, but a very widely and deeply believed one) then people will want some control over deadly violence, and national leaders will want some control over deadly violence. Even a democratized United Nations would move control further from the hands of parties that very much want it. If, on the other hand, we believe the data that nonviolence is more effective than violence, then no war machine is needed — which is of course the reason many of us see for trying to get rid of war.

Ranney gives some examples of what he calls “strong” international law, such as the WTO, but they do not involve militarism. It’s unclear why a strong use of the laws against war need use war in violation of itself. Discussing enforcement of a nuclear weapons ban, Ranney writes: “a recalcitrant international outlier must be treated in basically the same manner as a domestic murderer.” Yes. Good. But that requires no armed “peace force.” Murderers are not typically dealt with by bombing everyone around them (the justifications for attacking Afghanistan in 2001 being an obvious and disastrous exception to that rule).

Ranney also supports as an afterthought what I think ought to be central to this project. He writes: “Not that a UNPF [United Nations Peace Force] ought to be engaged in nothing but the application of force. On the contrary, there ought to be a ‘peace and reconciliation’ force that makes full use of conflict resolution and other nonviolent approaches, something like the existing Non-Violent Peaceforce. There would need to be diverse types of peace forces, appropriately staffed and trained to focus on diverse challenges.”

But why make this superior approach a side note? And how does doing so differ from what we’ve got right now?

Well, again, Ranney is proposing a democratized U.N. not dominated by five big war makers and weapons dealers. This is a major point of agreement. Whether you cling to violence or not, the first question is how to bring the United States and its allies into the world community of law — including how to democratize or replace the United Nations.

But when envisioning a democratized world body, let’s not envision it using the tools of the Middle Ages, albeit with horrific technological advances. This parallels in my mind science fiction dramas in which humans have learned space travel but are extremely eager to initiate fist fights. That’s not a likely reality. Neither is a world in which the United States has abandoned rogue-nation status while the customary interaction between nations consists of bombing people.

Getting to a world beyond war without using war to do so is not a matter of personal purity, but of maximizing the likelihood of success.