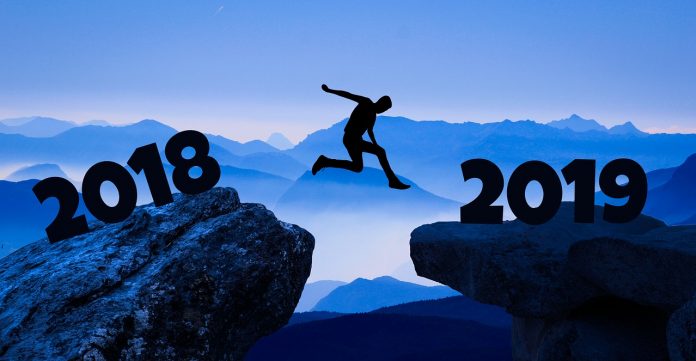 Many years ago, I came across a pre-Islamic Arabic poem describing a camel running across the desert. Suddenly, the camel freezes in mid-stride. First, it looks backward in fear of what it was running from, and then it turns its glance forward – also in fear – toward the unknown that is its destination. It was this image that came to mind as 2018 came to an end and I sat down to write about the year that was and what we expect might unfold in the new year.

By any measure, 2018 was a tumultuous year, in no small way owing to President Trump’s unpredictable behavior. He has been, in a word, exhausting.

We began and ended 2018 with a short government shutdown owing to Trump’s insistence that Congress agree to fund the wall on the Mexican border, despite opposition from Democrats and some leaders in his own party. When Democrats offered the White House partial funding of the wall in an effort to secure a compromise on immigration reform, Trump balked and upped the ante demanding, in addition to his wall, an end to the diversity lottery and family unification – making disparaging remarks about immigrants from the African continent in the process. He also dramatically reduced the number of refugees admitted to the US and imposed new hardships on those seeking asylum. Added to this has been the Administration’s “family separation” policy which produced the nightmarish result of thousands of little children being taken from their parents at the border and sent to far-away locations. At year’s end, we once again have a government shutdown, no wall, and no indication that the White House is willing to compromise.

In 2018, Trump also repeatedly upset international relations alienating allies both East and West. He frustrated Europe by unilaterally walking away from the Iran nuclear deal; outraged Arabs by moving the US Embassy in Israel to Jerusalem; imposed stiff new tariffs on imported steel and aluminum; once again acted unilaterally with a bizarre “love fests” with North Korean dictator, Kim Jong-un and Russian President Vladimir Putin causing unease with NATO and South Korea and Japan; and then, at year’s end, surprised everyone by announcing that he was pulling all US forces out of Syria and drawing down US forces in Afghanistan.

2018 also witnessed upheaval within the Administration, itself. Trump lost or fired his Secretaries of State, Defense, Health and Human Services, Veterans Affairs, and Interior, the Attorney General, the Administrator of the Environmental Protection Agency, the National Security Advisor, the United Nations Ambassador, the White House Chief of Staff, Legal Counsel, and Director of Communications, and a dozen other senior White House officials.

During all this time, Trump spent the year besieged by the growing threat to his presidency posed by the investigation being conducted by Special Counsel Robert Mueller. The Mueller probe and ancillary investigations have thus far taken a hefty toll. Five individuals who worked with the Trump campaign have been found guilty of crimes ranging from conspiracy to making false statements under oath. Add to this, Trump’s long-time personal attorney pleaded guilty to a number of financial crimes in which he implicated Trump. And the investigation is still underway.

If this were not enough, the President has compounded the exhaustion with his incessant tweeting. Each morning a wary public awakens to see what outrageous charges, defamatory rants or insults Trump has to offer. The news networks have unfortunately been accommodating since they spend the better part of each day amplifying his tweets discussing them as if they were “Breaking News.”

In the midst of this chaos, Trump has been successful in pursuing his agenda of undoing much of President Obama’s accomplishments. There was: a tax cut that resulted in a massive upward redistribution of wealth; a dismantling of regulations that protected consumers, the environment, natural resources, air and water, health and safety; an end to Obama-era education-related policies; and the gutting of Obama’s signature legislation reforming health insurance – which is now in danger of completely unraveling.

Not everything has been bad news. Trump did lend his support to a significant criminal justice reform bill that passed with bipartisan support. And he did renegotiate a new trade agreement with Mexico and Canada.

Despite these accomplishments, some good, mostly bad, it is the chaos that has dominated the news – and for this, the President can only blame himself. I am reminded of a line in T.S. Eliot’s “Four Quartets” where he describes the faces of passengers on the London Underground being “distracted from distractions, by distractions.” This has been our fate in 2018. We are almost unable to focus on one crisis before our attention is diverted by yet another: a mass shooting (once again in 2018, there has been almost one a day); upheaval in the White House; new Mueller indictments; or an incendiary Trump tweet. The result has been a near perpetual state of nervous anxiety.

So much for looking backward at the year, we are leaving behind. The problem, of course, is that, like that camel in the poem, we can only feel apprehension as we now run head-long into the year that awaits us – 2019.

I learned a long time ago, that the true test we face in life is not how we accomplish the goals we set for ourselves, but how we confront the unexpected challenges that lay before us. We can only predict some of what 2019 will bring.

Democrats will be in control of the House of Representatives and they will not give Trump an easy time. They will begin the year with an inherited government shutdown and a president still insisting that they find $5 billion in the budget to build his wall (the one he had insisted would be paid for by Mexico). Any compromise they may reach with the White House will still need to be approved by the Republican-controlled Senate.

The New Year will also bring forward the results of Mueller’s investigation into Trump campaign collusion with the Russians during the 2016 election and whether or not Trump attempted to obstruct justice by impeding the investigation. Whether or not Democrats want to hold hearings on White House activities related to these or other matters, the Congress will, of necessity, have to react to the Mueller findings or to the Administration’s reactions to it (for example, by firing Mueller or attempting to bury his report).

The immigration crisis on our southern border will not let up, nor will the challenges to health care reform resulting from a number of court decisions which have put the stability of the current system in limbo.

Then there are crises in the world with which we’ll have contend. These we can’t predict. Will Turkey take advantage of the US departure to attack Kurdish forces in Syria? Will Israel attack Lebanon? Will the unconscionable behavior of the Iranian-backed militias in recently “liberated” areas of Iraq provoke a resurgence of Daesh2.0? Will the Taliban see the US draw-down as an opportunity and launch a Spring offensive? Will Netanyahu win again, will he be indicted, and will Palestinians react to the unbearable pressure they face at the hands of the Israeli occupation?  Will the “Deal of the Century” ever see the light of day? And will Congress, as expected, continue to apply pressure Saudi Arabia, and what impact will that have on the continuing devastating war in Yemen? And then there’s China’s expansionist moves, Iran’s regional meddling, Russia’s continuing aggression in Ukraine, and what about Brexit?

The list of challenges is by no means complete, but it’s enough to cause us to know that we are hurtling into an uncertain future with good reason to be filled with apprehension.

Along the way, there will be distractions aplenty. We’ll have the expected announcements of what may as many as three dozen Democratic presidential aspirants – each announcement will provide “Breaking News” for the networks. And, yes, there will be an endless stream of Trumpian tweets.

I understand the camel and I’m nervous and not a little exhausted.