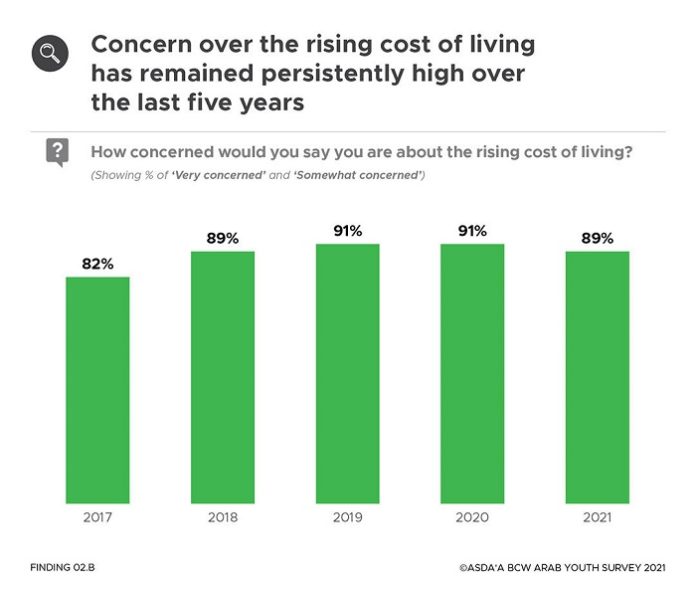 Jeddah (UNA-OIC) – ASDA’A BCW’s 13th Arab Youth Survey 2021 revealed that most Arab youth in the Middle East and North Africa (MENA) believe that their best days lie ahead despite the pandemic, ongoing conflicts and unprecedented economic decline in the region.

The 13th annual ASDA’A BCW Arab Youth Survey 2021 was conducted by international research firm PSB Insights to explore attitudes among Arab youth across 50 cities and territories in 17 countries in the MENA region, which has the Arab world’s largest demographic of more than 200 million young men and women.

PSB Insights conducted face-to-face interviews among 3,400 nationals of MENA countries aged between 18 and 24 years, from 6 to 30 June 2021. The survey sample was split equally between males and females.

Last year, the economies of the Middle East suffered losses estimated at about US$227 billion as a result of the outbreak of the COVID-19 pandemic, which brought some countries to the brink of bankruptcy. However, when asked whether they think their coming days will be better or worse, 60% of Arab youth respondents expressed optimism about the future – the highest level of optimism recorded by the survey in five years.

The survey report, titled “The Future with Renewed Hopes”, highlights the optimism of young Arabs; Nearly half (48%) of them say they will lead a better life than their parents – the highest level in three years while 24% expect it to be the same. Half of the respondents say that their countries’ economies are moving in the right direction, and most of them expected a comprehensive economic recovery by 2022.

These promising findings do not mitigate the challenge facing regional policymakers, with 89% of Arab youth expressing serious concern about the rising cost of living.

More than 8 in 10 people were also concerned about unemployment and the quality of education, while over a third (37%) said they were struggling to make ends meet. A third (33%) of those indicated that they or a family member had lost their jobs due to the COVID-19 pandemic.

The survey revealed an increase in the percentage of Arab youth who have confidence in their governments to solve their problems, with nearly three-quarters (72%) of them believing that their governments care about their opinions – which is supported by 88% of youth in the Gulf states. This belief also prevails in North African and Eastern Mediterranean countries.

In other interesting findings, Egypt, the UAE and Saudi Arabia are widely considered to be the region’s strongest allies, with more than eight out of 10 Arab youth describing them as a strong ally or somewhat of an ally of their country.

Arab youth also consider China and Russia as the region’s fourth and fifth strongest allies, while the United Kingdom and the United States rank eighth and ninth, respectively. Meanwhile, Arab youth remain to feel the influence of the U.S. in regional affairs, with over half (51%) saying that it has the strongest influence in the Arab world, followed by Saudi Arabia (29%) and the UAE (23%).

For the 10th year in a row, about half of young Arabs (47%) chose the UAE as their preferred destination to live in, which is more than double the number that chose the United States, which came in second place according to the survey.

The lack of economic opportunities is still the main motive for the migration of Arab youth, as a third of respondents (33%) said that they were thinking, or trying to leave their countries, and although it is a large percentage, it remains much lower than the 42% recorded in 2020.

BCW Global Chief Executive Officer Donna Imperato said: “Over the past 13 years, the findings of our annual Arab Youth Survey have provided a fascinating window into the hopes, fears and aspirations of the generation that will shape the future of MENA, a region of great importance to the prosperity, security and well-being of the entire world.”

For his part, Sunil John, President, MENA, BCW and Founder of ASDA’A BCW, said: “As one of the region’s largest communications consultancies, with a rich heritage stretching back 21 years, ASDA’A BCW has been committed to giving young Arab men and women in MENA a voice through our annual Arab Youth Survey.”

“Inevitably, this year’s research has illustrated many of the pandemic’s extremely damaging effects, as well as the work required to meet the future hopes of Arab youth. However, at the same, it has shone new light on the deep reserves of optimism and pragmatism among our young people. Such positivity is hugely encouraging and a strong platform on which policymakers can build a better and prosperous future,” he added.