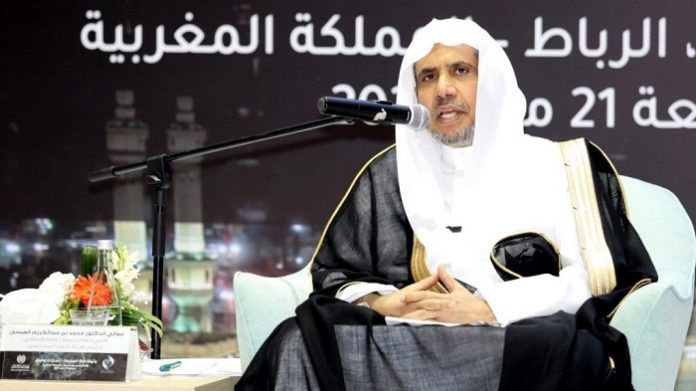 Rabat (UNA-OIC) – The Islamic World Educational, Scientific, and Cultural Organization (ICESCO) held on Friday at its headquarters in Rabat, Morocco, a scientific symposium, in partnership with the Muslim World League (MWL), under the theme “Makkah Charter: Achievements and Perspectives”.

The event, during which Dr. Mohammad bin Abdulkarim Al-Issa delivered the main lecture, enjoyed high-level participation and witnessed rich discussions with the aim to achieve the goals of the Charter approved by scholars and intellectuals coming from 27 Muslim sects and schools of thought.

The symposium began with the recitation of some verses from the Holy Quran, followed ICESCO Director-General Dr. Salim M. AlMalik’s address, during which he welcomed Dr. Al-Issa and his delegation.

AlMalik stressed that the symposium is an opportunity to exchange views and explore ideas on the Makkah Charter. He hoped that the efforts of Arab and Muslim countries will put an end to the sufferings of the Palestinians and help restore Al-Quds Al-Sharif and Al-Aqsa Mosque, after having a truce reached in the occupied territories.

Cultural Advisor to ICESCO Director-General Dr. Abdelilah Benarafa highlighted, in his introduction, the urgent need for issuing the Makkah Charter from the Qibla that unifies all Muslims to disseminate enlightened Islamic thought and respect all religions.

During the symposium’s main lecture, the MWL Secretary-General explained the achievements and perspectives of the Charter that was able to unify Muslim Scholars. He noted that Muslim intellectuals were well aware of their scientific and intellectual duty to issue the Charter which was signed by more than 1,200 Muslim Muftis and Scholars representing various Muslim sects and schools of thought. More than 4,500 Muslim intellectuals attended the conference which issued it.

Al-Issa stressed that the Charter tackled several key contemporary issues, raised awareness and transmitted enlightened Islamic thought, especially to the youth of the Muslim world. He added that the document was based on the Madinah Charter that Prophet Muhammed (PBUH) signed, which calls for the respect of religious and civil rights. The Makkah Charter is considered an extension of that historical document.

He also praised the roles that ICESCO plays, hoping that the Organization will carry on its mission of publicizing the Makkah Charter, which was approved by Muslim world countries during the Meeting of Foreign Ministers.

Following the main lecture, the participants expressed their views, during which Secretary-General of the Mohammedia League of Scholars Dr. Ahmed Sennouni reaffirmed that the Makkah Charter should be a source of inspiration, both at the personal and collective level, for it is regarded as a humanist document considering its goals and functions.

Dr. Khalid Samadi, Director of the Moroccan Center for Studies and Educational Research, noted that the Charter corrected some misconceptions, enshrined various values, and developed skills to overcome differences.

Dr. Mahjoub Bensaid, a researcher in the fields of communication sciences and cultural dialogue, presented many proposals to strengthen the universal character of the Charter.

Dr. Mustapha Zabbakh, Rapporteur of the Academy of the Moroccan Kingdom, then praised the document’s aim to free the Muslim mentality from misconceptions to build a renewed understanding of Islam.