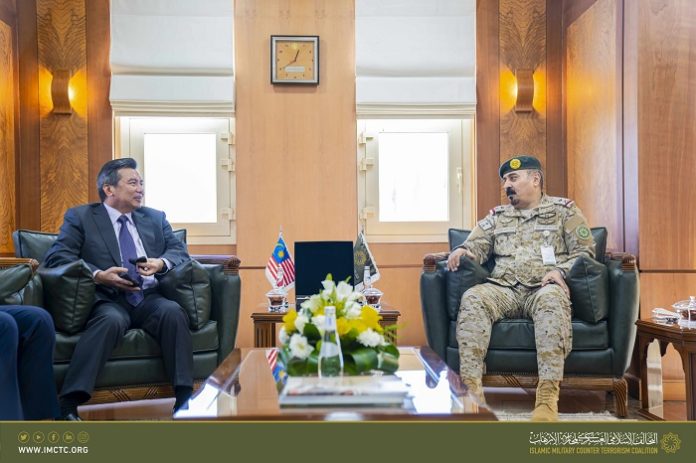 He also commended the coalition’s achievements in combating terrorism and violent extremist ideology, in addition to its various fields of work.

This came during a visit by the Malaysian deputy minister of defense and his accompanying delegation on Monday to the IMCTC headquarters in Riyadh, where he was received by Acting IMCTC Secretary-General Maj. Gen. Mohammed bin Saeed Al-Moghedi.

Abdul Aziz lauded the pioneering role played by the Kingdom of Saudi Arabia in establishing this coalition and supporting it to be of independent sovereignty, and of an international affair concerned with fighting terrorism.

During the visit, the Malaysian delegation listened to a detailed explanation of the coalition’s efforts to combat terrorism in the four fields (intellectual, media, combating terrorist financing and the military), and the role it plays in coordinating the efforts of the member states. ways of joint cooperation between IMCTC and Malaysia were also discussed during the visit.

Al-Moghedi stated that IMCTC represents an integrated system that seeks to strengthen counterterrorism cooperation among its member countries, based on the values of legitimacy, independence, coordination and participation. He added that the coalition strives to ensure that all counterterrorism actions and efforts made by its member countries are aligned with international regulations, norms and laws.

IMCTC Secretary-General also stressed the great role of Malaysia in combating terrorism and violent extremism in all their forms and fields in the East Asian region, and the country’s permanent endeavors to root out extremism and renounce violence.