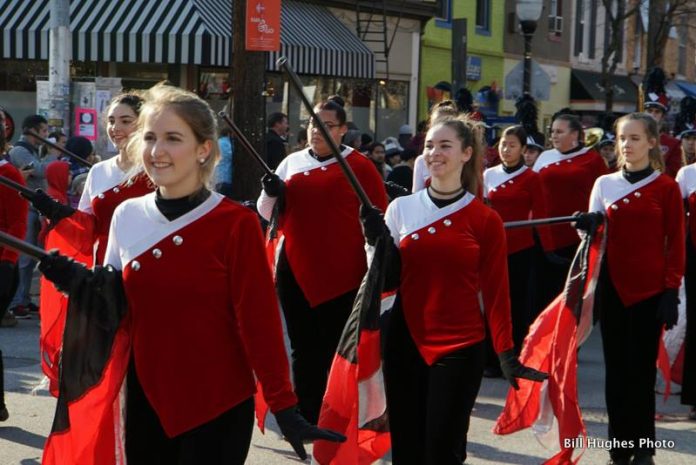 The Mayor’s Annual Christmas Parade, a gala event, was launched, in Hampden, (Hon), Baltimore, Maryland, on Sunday afternoon (12.03.17). The weather was sunny and a little on the cold side, but no strong winds to speak of and, mercifully, the rain held off. This is the 45th year that the parade has been celebrated in one of Baltimore’s most fun-loving neighborhoods.

“The Avenue” (36th Street) was packed with parade lovers, which included lots of young children on both sides of the avenue. The latter group was waiting anxiously for their favorite Christmas celebrity to make an appearance: Santa Claus!

The old Boy-oh, with his white beard and red outfit, didn’t disappoint. He made a special trip from the North Pole to fulfill his duties in Hampden. The kids just loved it and so did their parents. (Just imagine if he didn’t show! What a fix mom & dad would have been in.)

According to parade officials, they expected about 160 marching units to participate in the festivities this year with an audience of about 6,000. You can’t, however, have a parade without a marching band. I spotted at least three dozen colorful bands or more, while I was out on “The Avenue” doing my canvassing.

One of the bands was a colorful contingent from my alma mater – Calvert Hall College High School (now located in Towson.) They looked and sounded GREAT! You go Cardinal and Gold! (Note: When I attended CHC, it was located at Cathedral and Mulberry Streets just across the street from the Central Pratt Library.)

There were also the faithful politicos in attendance; Baltimore Councilwoman Mary Pat Clarke; Baltimore County Executive, Kevin Kamenetz, who is also a candidate for governor; Nick Mosley, Maryland House of Delegates and Rep. John Sarbanes; along with an array of TV and radio personalities, such as WJZ’s popular Bob Turk.

Dancing groups, Star Wars characters, Miss Yuletide, along with some vintage automobiles were in the parade. Motorcycles galore – try over 100 – from various groups, also participated in the event.

In between watching the parade, folks had plenty of chances to buy some food, drinks, (at Frazer’s), art (at Art Under Ground Studio), books (at Atomic Books), a decaf at Spro’s Coffee Shop, and other goodies from the local merchants on and near “The Avenue.”

The Mayor of Baltimore, the Hon. Catherine Pugh was there along with the Police Commissioner, Kevin Davis. On December 6, 2017, Pugh will be celebrating her first year in office. She is Baltimore’s 50th mayor. The mayor and police commissioner both got very warm receptions from the parade watchers. Unlike some past mayors, particularly her predecessor, Stephanie Rawlings-Blake, Pugh is competent, conscientious, hard-working and very likable.

However, Mayo Pugh has had a rocky time lately, with the rising crime rate in the city. The negative publicity for Baltimore has been widespread, too, including a story that ran recently in the “London Daily Mail.”

Most Baltimoreans are hoping Mayor Pugh will rise to the occasion, demonstrate firm leadership and put these issues behind her. She has the makings of becoming one of our best mayors.

Getting back to the parade, its route extended for an estimated 2.5 miles. It began up on Falls Road, at Poly/Western High Schools; then it traveled south to 36th Street, aka “The Avenue;” where it hooked a left turning east for about five or six blocks. Finally, it turned north/left on to Chestnut Avenue and finished up two blocks away at 37th Street.

The parade started at 1 pm sharp and finished about three hours later. To learn more about it and its sponsors, go to https://www.facebook.com/MayorsChristmasParade/

Check out more of my photos on my Facebook page.