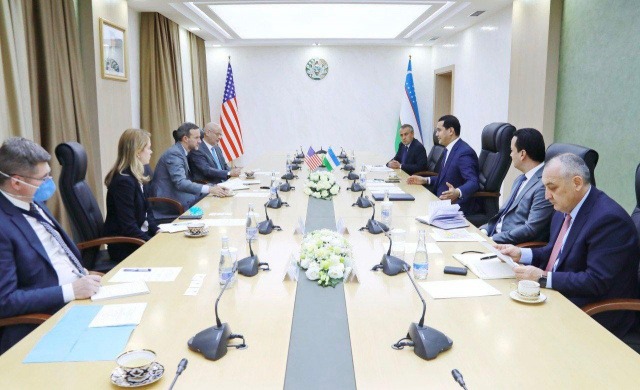 Deputy Prime Minister, Minister of Investments and Foreign Trade of the Republic of Uzbekistan S. Umurzakov has met with the First Chief Executive Officer of the U.S. International Development Finance Corporation (DFC) Adam Boehler, during which they discussed prospects for development of cooperation in the context of strengthening bilateral relations between Uzbekistan and the United States.

Adam Boehler noted the high interest in the Corporation’s direct participation in the process of socio-economic reforms in the country through co-financing of priority projects and initiatives aimed at developing the private sector and infrastructure.

For an early transition to practical cooperation, American partners were suggested to consider a package of 27 specific investment projects in agriculture, light industry, pharmaceuticals and building materials production.

The American side expressed its readiness to consider opportunities for participation in public-private partnership projects in solar and wind energy, as well as the transport sector.

The parties also discussed the existing potential for involving DFC in financing private investors involved in privatization of large state-owned enterprises and commercial banks in Uzbekistan.

The possibility of creating a joint investment fund with equity participation of the DFC and Uzbekistan Government with the prospect of attracting the governments of other countries of Central Asia and Afghanistan was discussed.

Issues of involvement of other interested parties to participate in creating this Fund were discussed.

Following the negotiations, an agreement was reached on creation of a joint working group in order to work out the reached agreements and develop new areas of partnership.