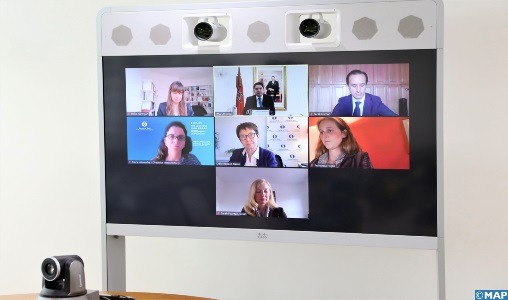 During this meeting, Bourita welcomed EBRD’s new strategy which is deployed in strategic areas such as green and digital transitions and which is perfectly in line with the priorities set for the Kingdom by King Mohammed VI, said a press release by the ministry.

Bourita also lauded the positive dynamic of cooperation between Morocco and the EBRD both bilaterally and trilaterally, stressing that this cooperation was particularly strengthened during the COVID-19 pandemic, which posed challenges and offered opportunities.

He also affirmed the Kingdom’s active commitment within the framework of the new communication on neighborhood, reiterating Morocco’s determination to make the southern neighborhood a success story.

The minister also underlined that Morocco, as a platform towards Africa, remains ready to share its knowledge of the continent, its expertise as well as its network to implement a common action on the continent, underlining the interest of Morocco to host the EBRD-MENA regional headquarters.

For her part, Renaud-Basso insisted that Morocco was a key partner of EBRD, with which cooperation had been particularly consolidated during the period of the pandemic.

The EBRD president also highlighted the priority areas of the EBRD’s action in Morocco, namely the development of the private sector, the support for the transformation of public enterprises, the fight against social and territorial inequalities with the launch by Morocco of the social protection systems as well as the digitization of the administration.

Renaud-Basso commended Morocco for its constructive role at the regional level, as well as for its commitment to a green transition, in particular through the development of renewable energy as well as its actions during the COP-22 presidency.