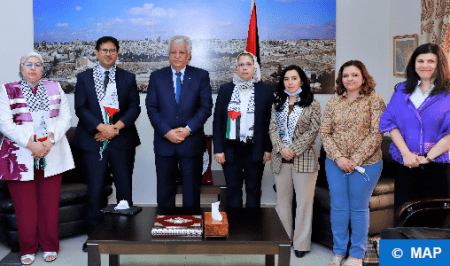 Rabat (UNA-OIC) – The Morocco-Palestine Friendship and Cooperation Group at the House of Advisors reaffirmed, on Wednesday in Rabat, its full, unwavering and unconditional solidarity with the Palestinian cause and the Palestinian people.

During a meeting with the Palestinian Ambassador in Rabat Jamal Choubki, the group highly praised the resistance and activism of the Palestinian people, particularly the population of Al-Quds Al-Sharif (Jerusalem), to face the Israeli attacks against children, women and the elderly.

The Palestinian cause is a national cause placed alongside the question of the territorial integrity of the Kingdom, affirmed the president of the group, Fatima Zahra Yahyaoui in a speech.

The Palestinian issue is that of all Moroccans from all political and union affiliations, she insisted, adding that the Moroccan people have always had an emotional and spiritual relationship with Palestine and Al-Quds in particular.

For his part, the Palestinian ambassador stressed the importance of this solidarity and support, noting that Morocco is a strong and influential country in its region.

On this occasion, Choubki expressed his gratitude to King Mohammed VI for his human initiatives, welcoming the efforts made by the Bait Mal Al Quds Asharif Agency, which supports the population of Al-Quds through many projects.