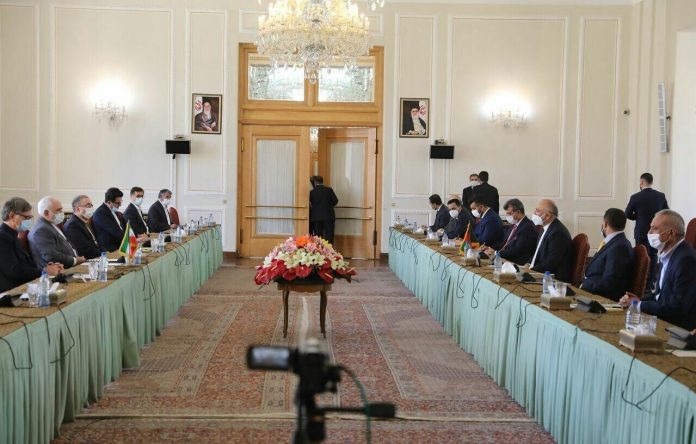 In addition to meeting with Iranian Foreign Minister Mohammad Javad Zarif, Atmar and members of the accompanying delegation met with the Secretary of the Supreme National Security Council, the Minister of Interior, the Minister of Energy and the Minister of Cooperatives, Labor and Social Welfare of the Islamic Republic of Iran.

During the meeting, the two sides discussed exchanged views in the framework of the 8 working groups, including the Committee on Comprehensive Cooperating Document, Legalization of Citizens’ Residence, Border Cooperation, Labor, Water, Cultural Cooperation, Energy and Health, on developing and expanding relations between the two countries in various dimensions. The following results were obtained:

1. In order to institutionalize and organize bilateral relations, the parties agreed on the need to continue negotiations on the finalization of the Comprehensive Cooptation Document, and the preparation of the said Document for the signing of Presidents within three months.

3. The two sides stressed the need to reduce violence in Afghanistan in order to build trust and create a positive atmosphere for the start of negotiations, as soon as possible, to achieve a permanent ceasefire and establish lasting peace.

4. Given the importance of regional and international consensus for restoring peace and security in Afghanistan, the two sides stressed the need to strengthen regional and international cooperation and consultations and to activate existing capacities in the region to facilitate negotiations and support the Islamic Republic of Afghanistan. To this end, they stressed the need to establish a regional initiative centered on Afghanistan and the participation of neighboring countries and the participation of other influential countries and the role of the United Nations in supporting the inter-Afghan peace process.

5. The two sides stressed the importance of the continuation of this cooperation in the future, noting the good cooperation and coordination of the two countries in international forums and issues of mutual interest and common concerns, including human rights and protection of citizens’ rights.

8. The recent incidents of human casualties have been discussed in detail and Iran has informed of the progress of the investigation to Afghanistan and both sides have agreed to take measures to prevent such incidents.

9. The Committees of Security-Border and Legalizing Presence of the Nationals of the two countries have been tasked with taking steps to ensure the security of the two countries’ common borders to prevent illegal commute and human and goods trafficking. In this regard, the two sides considered the need for the presence of Afghan security forces in the evacuated border checkpoints of that country and also to facilitate the issuance of visas to the Islamic Republic of Iran.

10. In order to facilitate the commute of citizens, vehicles and goods between the two countries, during Atmar’s visit, a memorandum of understanding of joint efforts to comply with international health regulations at border crossings (road, rail, air and sea) between the Ministry of Health, Treatment and Education of the Islamic Republic of Iran and the Ministry of Public Health of the Islamic Republic of Afghanistan was signed.

11. The two sides announced that in the framework of the Comprehensive Cooperation Document, with the signing of a bilateral agreement, while regulating the legal presence of the Afghan labor force in the Islamic Republic of Iran, will provide the necessary permits for the presence of economic activists and specialized forces in Iran and Afghanistan.

12. Both sides stressed the need for close and effective monitoring and control of the joint border by the two countries’ border guards and pledged to prevent the unauthorized crossing of the border, human trafficking, narcotics, and the smuggling of other substances into each other’s territory.

13- The parties agreed on regional and multilateral economic-trade cooperation, including in the field of transit and transportation, and emphasized the role of Chabahar port as the driving force of commercial-transit cooperation in the region.

14. The Parties also took into account the need to provide welfare facilities in ports and border terminals, and in particular, agreed to take joint action as soon as possible to repair infrastructure and asphalt on the Dugharon border crossing.

15. The two sides agreed to continue to work on energy, especially renewable energy.