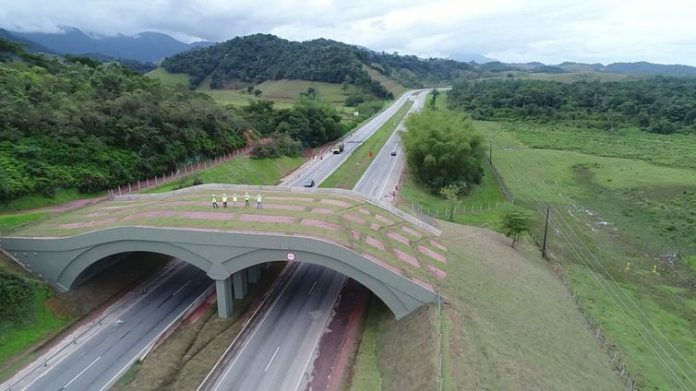 The first step towards bringing the golden lion tamarins living in the Poço das Antas Biological Reserve together with other specimens living in the strip of Atlantic Forest in Rio de Janeiro was taken this Sunday (Aug. 2). The first viaduct with native Atlantic Forest species over highway BR-101 was inaugurated, in exchange for the permit to duplicate the road, which connects the North to the South of Brazil.

According to NGO Golden Lion Tamarin Association council chair and State University of Northern Rio de Janeiro (Uenf) Professor Carlos Ramon Ruiz, the duplication of BR-101 has severed the Poço das Antas Reserve from the rest of the Amazon Forest. The highway underpasses do not serve for the traffic of tamarins.

This has deprived the population of golden lion tamarins in the reserve of their chance to communicate and mingle with other specimens living across the road, leading to little genetic variability in the future population.

“If they remain isolated, it’ll be difficult to keep this population viable indefinitely. We’d have to take specific action to tackle the issue, removing and bringing animals [from other places] in the reserve,” Ruiz said.

The evidence that the population that is isolated and has no genetic diversity faces difficulties remaining viable in the long run was the outbreak of yellow fever in 2016 in Rio de Janeiro state. The disease brought the population of golden lion tamarins in Poço das Antas was virtually decimated, going from 300 individuals to approximately 30 or 40, Ruiz reported. In order to repopulate the area, animals had to be brought from other locations.

The tamarins are also likely to take some years before they use the viaduct, the researcher pointed out. “If this planting proves successful, there should be vegetation high and continuous enough in four years for the tamarins and other animals to cross the viaduct,” he added.

The golden lion tamarin (Leontopithecus rosalia) is an endemic species in the São João river basin, Rio de Janeiro state, and is threatened with extinction. The animal has become a symbol of the fight for the preservation of the Atlantic Forest.

Createed in 1974, Poço das Antas was the first biological reserve in the country aimed at preserving the Atlantic Forest and protecting species like the golden lion tamarin and the maned sloth.