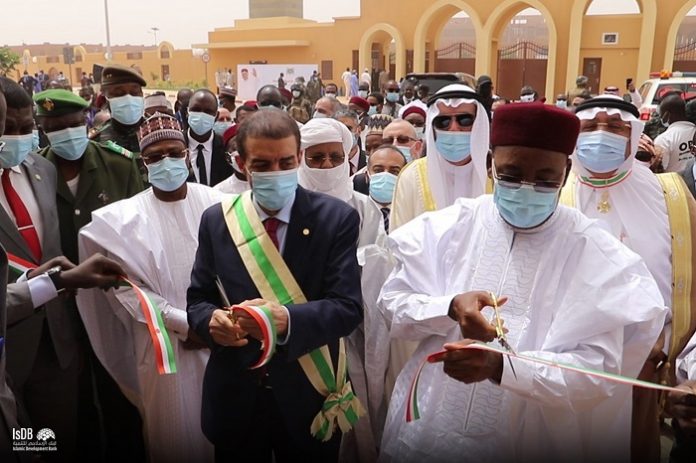 Attending the ceremony at the President of Niger’s special invitation, IsDB President Dr. Bandar Hajjar, who was a key guest and speaker at the event on Monday. He touched upon the importance of the project, stating that it addresses the needs of the community in the Republic of Niger and the nearby countries which are already suffering from low education services and social indices.

The IsDB has been entrusted with supervision and implementation of the new facilities in full coordination with the University and has ensured that the campus is designed in accordance with modern international standards and equipped with the latest technologies.

This new academic facility is provided with a solar plant that supplies the facilities with the needed power for operation reducing the monthly electricity bills and maintaining a nearly green building concept.

Hajjar also seized this opportunity to commend President Issoufou as well as the Government and people of Niger for the socio-economic progress achieved over the past decade. “Niger’s economic growth reflects the committed leadership, its pro-poor stance and transformational policies,” he said.

The IsDB President expressed his gratitude to the Kingdom of Saudi Arabia for its support and commitment to helping societies around the world through its support for several initiatives, funds and programs managed by the Bank, such as the Islamic Solidarity Fund for Development, the Quds and Al-Aqsa Funds, the Living and Livelihood Fund, in addition to the King Abdullah Program for Charity Work.

At the end of the ceremony, President Issoufou conferred on IsDB President Hajjar, the Grand Award, Niger’s highest distinction, in appreciation of his role in supporting socio-economic development in the West African nation.

During his official visit to Niger, Hajjar is also holding discussions and signing agreements with the Minister of Planning, who is also the IsDB Governor for Niger.

The Niamey University Complex for Girls, inaugurated on Monday, is the female campus of the Islamic University of Niger (IUN), a university that belongs to the OIC and currently serves more than 3,300 students from 23 countries in the African continent (some coming all the way from Chad, Nigeria and Comoros, among others).

The University currently houses five faculties in different specialties and aspires to become one of the leading research and educational institutions responding to the needs of the people in West Africa as well as the whole continent, by promoting a new generation of students, technically and morally equipped to face the future challenges of the world.