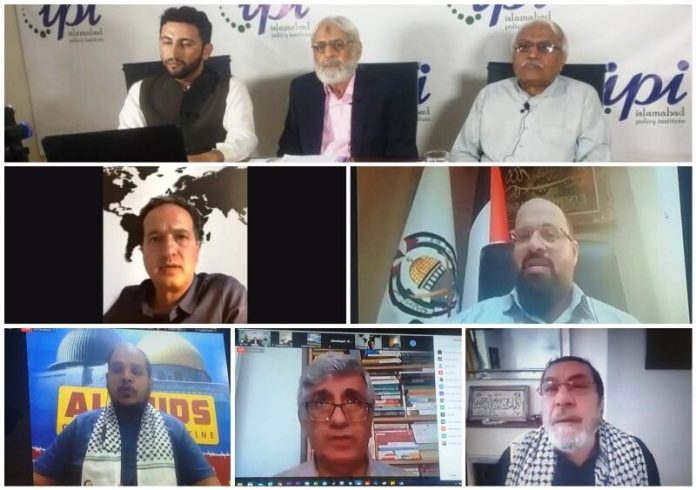 Speakers from Iran, Turkey, Pakistan, Britain and Palestine were speaking at an international webinar hosted by Islamabad Policy Institute, a local think tank, on ‘Implications of Arab-Israel Normalization for Muslim World’.

They added that emerging trend of Arab – Zionist regime normalization of ties was a prelude to a new order in the Middle East, which would leave the Muslim world further divided.

The webinar, which coincided with the signing of agreements between Zionist regime and UAE and Bahrain in Washington for normalizing their relations, was held to deliberate on the development and the future direction of the events.

Dr Kayhan Barzegar, a Tehran based Middle East expert, said the development would add to extremism and terrorism in the region by promoting division in Arab and Muslim world.

About Iran, he said it would completely change the calculus of Iran’s defense strategy and complicate ties with UAE.

Dr Barzegar contended that the process started by the Arab rulers would not be sustainable as the people have rejected it. “Region not ready for such a compromise,” he said.

Dr. Levent Baştürk, a Turkish academic, said the normalization agreements would not remain limited to few countries, but would eventually evolve into a regional alliance. He said that it is also aimed at restricting Turkey’s regional ambitions.

Dr. Baştürk said the reaction in the Arab streets to the development with regards to Zionist regime and the continuation of Palestinian resistance will shape Turkey’s approach to the issue. “If there is a strong reaction in Arab streets and Palestine, then Turkey would be on the supporting side of this popular movement,” he maintained.

Dr Khaled Qaddoumi, a leader of the Hamas resistance movement, said the Arab rulers’ action was not representing the sentiments of the masses. He said that the so-called normalization process was initiated to distract American and public from their respective domestic crises and bail out President Trump and Prime Minister Netanyahu.

He said these actions of the Arab rulers were not their own, rather they had been dictated by the US to do so. “People are revolting against these moves.”

Massoud Shadjareh, chairman of London Islamic Human Rights Commission, and Ali Mehr, a local Arab affairs analyst, said the silence of the Muslims on the happenings in the past emboldened the Arab rulers to move for normalizing with Zionist regime.

“If current wave of normalization is not challenged, it would grow and others too may join,” Shadjareh feared as he emphasized on the need for activism to challenge what he saw as “colonial systematic racism”.

Executive Director IPI Prof Sajjad Bokhari said the Arab monarchs are eyeing a new regional order in which they can foster greater cooperation with Zionist regime against their common regional foe i.e. Iran. He noted that the major challenge for the Arab rulers would be the legitimization of the erstwhile enemy.

He said the message for Palestinians from delinking of Arab- Zionist regime normalization and progress on the Zionist regime-Palestinian track is that their cause is no more a priority for them.

He said Pakistan was being pressured by Arab countries to follow suit.