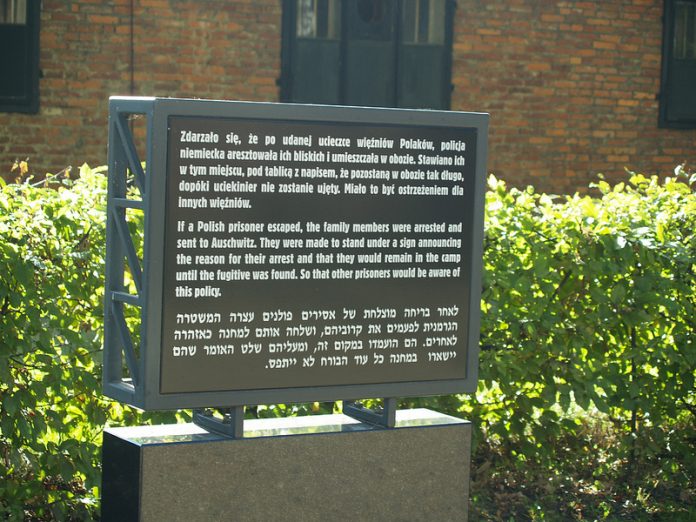 MANY YEARS ago, right after the fall of communism in Eastern Europe, I was asked to write a book about the events. Rachel took the photos, I wrote the text. The book, which appeared only in Hebrew, was called “Lenin Does Not Live Here Anymore”.

When we visited Warsaw, we were astonished by the many places in the city with metal plates announcing “(Name) was executed by the Germans at this spot”. Until then we had no idea that the Polish resistance had opposed the Nazis so fiercely.

After coming home, Rachel happened to enter a clothes shop and hear the female owner talking with a customer in Polish. Still full of her discovery, Rachel asked the owner: “Did you know that the Nazis also killed a million and half non-Jewish Poles?”

The woman answered “Not enough!”

Rachel was amazed. So was I.

We knew, of course, that many Polish Jews did not like the Polish people, but we were not aware of the intensity of this hatred.

THIS HATRED reappeared in full force this week.

The Polish parliament decreed that anyone who uses the words “Polish extermination camps” is committing a crime punishable by three years in prison. The right description, according to the Poles, is “Nazi extermination camps in Poland”.

The rectification is quite correct. But in Israel, a storm broke out. What?! The Poles deny the Holocaust? Do they deny that many Poles helped the Nazis to catch and kill the Jews?

That is what many Israelis believe. Quite wrongly, of course. Poland never made peace with the Nazis, unlike several other European countries. The Polish government fled to France and then to Britain, from where they directed the Polish resistance. Actually, there were two Polish underground organizations, a national and a communist one. Both fought the Nazis and paid a heavy price.

If I am not mistaken, it was the Polish government in exile which transmitted to the Zionist leadership the first reliable information about the extermination camps.

Were there Polish collaborators with the Nazis? Of course, there were, like in every occupied country. Without making any comparison, there are lots and lots of Palestinian collaborators in today’s occupied territories.

The main non-German helpers in the extermination camps were Ukrainians, whose hatred for Russia led them to sympathize with the Nazis. That and their own deep-seated anti-Semitism, stemming from the time when Ukraine belonged to Poland and Jews administered the estates for the Polish owners.

The Nazis did not really make a serious effort to gain Polish or Ukrainian cooperation. Hitler’s secret plan was to exterminate or enslave all the Slavs too, right after the Jews, in order to create more Lebensraum for the German nation.

YET IT took less than 10 years from the end of the Holocaust for Israel to sign an agreement with the German state, while the hatred for Poland continues unabated.

Nobody ever asks the most obvious question: how come so many Jews, millions of them, came to live in Poland in the first place?

Well, at the time Poland was the most open, even the most tolerant country in Europe. Fleeing Jews were welcomed and found a new home. The king had a Jewish mistress. An entire Jewish town grew up near Krakow, the center of Polish culture.

THAT POLISH-JEWISH Spring passed. What remained was the reality of a huge Jewish minority in Poland.

So it was almost inevitable that between the two groups there sprang up a mutual distaste, which turned into mutual hatred. There were some pogroms. However, it seems that in modern Poland Jews lived in comparative comfort. They were organized politically and set up coalitions with non-Jewish minorities.

Masses of Polish Jews tried to emigrate to Germany. The German Jews, who despised them, put them on ships and sent them to the United States, where they prospered.

The classic German Jewish poet Heinrich Heine wrote a poem that goes like this (my own unauthorized translation): “Krapulinsky and Washlapsky, / Poles from the Polackei / Fought for freedom / Against Muscovite tyranny. // Fought with valor and with luck / finally managed to escape to Paris / Because to live, like to die, / For the Fatherland is sweet.”

And further on, drunk in a Paris bar, one comforts the other: “Not yet is Poland lost, / Our women give birth, / Our virgins do so, too. / They will give us heroes!”

After the advent of Hitler, when German Jews started to arrive in Palestine, they found Polish Jews who had arrived there before, like Dovid Grün (David Ben-Gurion) from Plonsk. The German Jews were received by them with contempt and ridicule.

Polish anti-Semites were seen by the Zionists as natural allies in their effort to push the Jews towards Palestine. One episode, known only to a few: in 1939, a number of leaders of the Irgun underground in Palestine (to which I then belonged) had a brilliant idea: start an armed insurrection against the British rulers and set up the Jewish State.

Looking for assistance, and especially arms, they turned towards the anti-Semitic officers of the Polish army. The Irgun offer was simple: we shall help you to get rid of your Jews. You train them and provide them with arms, we put them on ships to Palestine.

The Polish general staff liked the idea, and training of young Irgun members in Poland actually started. The outbreak of World War II put an end to this adventure.

IT IS this convoluted relationship of many centuries that is now finding its expression in the Polish-Israeli clash of the last few days.

Many Israelis have been taught to believe that the Holocaust was a joint German-Polish enterprise and that the ovens of Auschwitz were operated by Poles. After all, wasn’t Auschwitz in Poland?

Was it an accident that practically all extermination camps were on Polish soil? (Actually, it was an ideal location for the Nazis, especially after their invasion of the USSR. The Jews were there.)

I DON’T believe that this exposition of facts will help. The sentiments are too deeply entrenched. But what the hell.