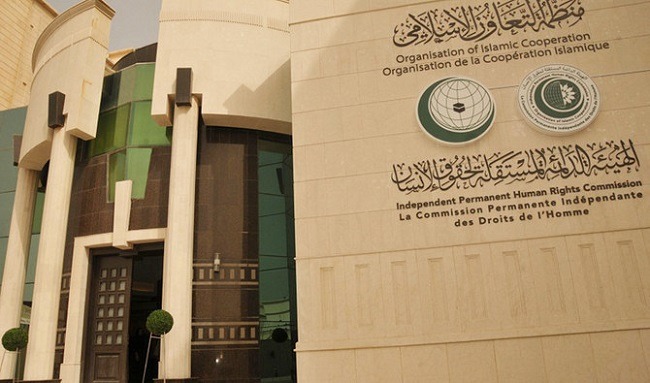 Jeddah (UNA-OIC) – The Independent Permanent Human Rights Commission (IPHRC) of the Organization of Islamic Cooperation (OIC) expressed concern over the recent judgment by the European Court of Justice (ECJ) on cases C-804/18 and C-341/19, in which local German laws concerning private enterprises are interpreted in a manner that prohibition on wearing of any visible sign/expression of political, philosophical or religious beliefs, including hijab (headscarf donned by Muslim women) is considered justified by the “employer’s need to present a neutral image towards customers or to prevent social disputes.

The Commission considered that the esteemed ECJ, while interpreting local laws, has overlooked the guarantees provided in the International Bill of Rights and other international human rights instruments to protect the fundamental freedoms and socio-cultural rights of individuals and minorities, especially women. The ECJ decision also completely ignored the socio-cultural particularities and religious sensitivities of many Muslim women, to whom, Hijab is not only an expression of religious symbolism but an integral part of their identity besides their fundamental right to choose the way they want to dress.

The Commission is concerned that such a narrow judicial interpretation would: (a) violate Muslim women’s freedom to manifest their religion or belief (ICCPR Art. 18(1), European Convention on Human Rights (ECHR) Art. 9 (1), EU Charter: Art. 10; (b) expose Muslim women to religious discrimination (ICCPR: Art. 2(1), Art. 26; Art. 2 of  Convention on the Elimination of All Forms of Discrimination against Women, ECHR: Art. 14; EU Charter: Art. 21; (c) violate the rights of minorities ‘to enjoy their own culture, to profess and practice their own religion’ (ICCPR Art. 27); (d) expose hijab/headscarf-wearing women to hate crimes, hostility or violence (ICCPR: Article 20 (2)); and (e) prevent them from exercising choice and autonomy in exercising their freedom of religion and/or cultural rights as predominantly Muslim women in Europe cite personal choice and identity as reasons to wear headscarf guaranteed under (ICCPR: Art. 17(1); ECHR: Art. 8(1); EU Charter: Art. 7 & 22.

Furthermore, based on the ‘principle of intersectionality’ Art. 2(2) of International Convention on the Elimination of All Forms of Racial Discrimination due attention should be given to social, economic, cultural, and other fields to ensure adequate development and protection of certain racial groups or individuals belonging to them, for guaranteeing them the full and equal enjoyment of human rights and fundamental freedoms.

The Commission emphasized that there is no derogation from freedom to manifest one’s religion or belief, provided in Art. 18 of ICCPR except to “protect public safety, order, health, or morals or the fundamental rights and freedoms of others,” let alone to innovate or justify a limitation imposed by employers to woo their customers’ perceived concerns to which there is no end. Such misplaced reasoning and interpretation will also have a cascading effect to disproportionately restrict Muslim women’s freedom to manifest their religion or belief, causing intersectional discrimination, greater socio-economic marginalization, cementing stereotypes, stoking hostility, and even physical violence because of their clothing. Such a dangerous legal precedent would threaten personal freedom and fortify physical and psychological barriers at the workplace and beyond that might ultimately result in social disharmony and violation of human rights, the Commission added.

The Commission urged the ECJ to revisit its judicial interpretation to bring it in line with the international human rights instruments to avoid damaging legal precedents, which would fuel growing intolerance towards Muslims, particularly women, and to legitimatizing the imposition of discriminatory /restrictive legislative and administrative measures on their right to observe their religion in different parts of Europe.