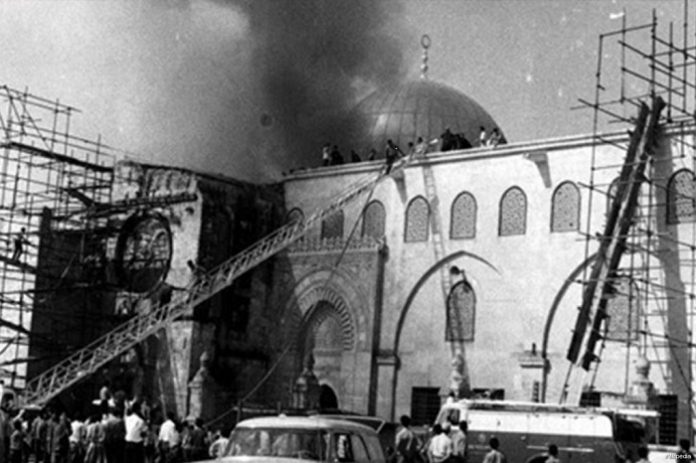 Jeddah (UNA-OIC) – Saturday, 21 August, marks the 52nd painful anniversary of the sinful arson attack on the blessed Al-Aqsa Mosque, the first of the two Qiblas and the third of the Two Holy Mosques, in light of the continuation of Israeli violations and attacks against Palestinian citizens in the neighborhoods of Al-Quds, especially against Al-Aqsa Mosque.

These violations and attacks fall within the context of implementing the policies of the occupying power aimed at Judaizing the city of Al-Quds, changing its geographical and demographic character, and isolating it from its Palestinian surroundings, in a flagrant violation of international law and relevant UN resolutions.

On this painful anniversary, the Organization of Islamic Cooperation (OIC) renews its firm support for the right of the State of Palestine to protect the Arab identity of Al-Quds, preserve its human heritage, and safeguard the sanctity of all Muslim and Christian holy sites.

The OIC calls on the international community to engage in a serious peace process on the basis of international law, resolutions of international legitimacy and the Arab Peace Initiative, with the aim of ending the Israeli occupation and enabling the Palestinian people to exercise their inalienable national rights, including the right of return, self-determination, and the establishment of their independent and sovereign state based on the 4 June 1967 borders, with East Jerusalem as its capital.