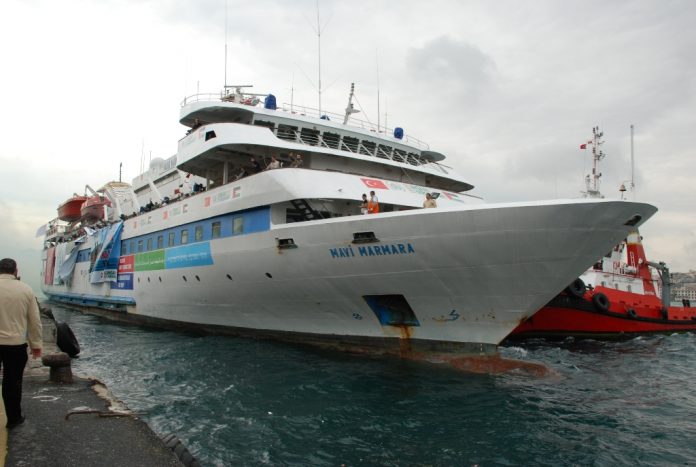 In our lives, we go through experiences and events that leave a lasting impression on us, especially if these experiences are humane. Thus, we become somewhat haunted –for lack of a better term- with scenes that we might not like, but which make us believe more strongly in the values of righteousness, justice and equality. Actually, they even make us more determined to strive towards achieving such values.

A short while ago I watched a movie titled Captain Phillips, which revolves around Somali pirates attacking an American cargo ship and is based on a true story. I am not fully adopting the narrative of the film nor am I accepting everything I saw in it at face value. However, I utilize it to reflect on some of the things that took place with myself and my fellow passengers aboard the Mavi Marmara ship of the Gaza Freedom Flotilla, due to the similarities of numerous events between the film and our experience.

The film took me ten years back when I joined more than 700 fellow international activists on six vessels -the largest of which was the Mavi Marmara. Our goal was to stand in solidarity with the people in Gaza, Palestine, highlight their suffering and break the inhumane and illegal blockade imposed upon them while also delivering humanitarian aid through our flotilla. Personally, I had purchased certain types of medications and nutrients for children there, hoping that each one of these items would help save the life of a child.

It is no exaggeration to say that each scene in the film brought back memories of various events that happened with us, which I will relay here. Yet I also want to deliver a message to the Israeli pirates who are idiots and murderers, to say the least. They should watch the film themselves to realize the similarities between them and the Somali pirates. Yet the Israeli pirates are even worse, criminally attacking unarmed civilians in international waters who were aiming to do purely humanitarian work. The difference between you, the Israeli criminals, and the pirates in the film is that the Somali pirates are powerless, yet you draw your strength from the forces of darkness and evil and those who control the situation temporarily in our world today.

In one scene, the Somali pirates were afraid. I remember how your so-called “elite” navy commandos were trembling with fear despite their vast military strength, weaponry, helicopters, and warships. Their eyes betrayed how scared they were, even though their faces were masked and we were handcuffed.

I also said you were idiots because you really are. You could have simply controlled the ships without any fuss or diplomatic crises with dozens of countries whose citizens were with us, and more importantly without cowardly shedding the blood of ten martyrs and wounding dozens with live ammunition. Yet with your stupidity, you insisted on exposing your true criminal selves before the entire world. And as a result, the cause of Palestine gained even more than it would have if the ships arrived at the ports of Gaza.

So although you claim to be a civilized nation, you have unmasked yourselves and have shown that you are really a state of pirates and terrorists, which mobilizes its oppressive forces against unarmed civilians carrying food, medicines and medical equipment.

You could have simply disabled the ship’s engine or used another method. Yet I believe that God wanted to show the world your true colours, and so you attacked with zodiacs and helicopters. In the process, you became a laughing stock before the world as the passengers heroically defended themselves with their bare hands against these heavily armed commandos the moment they landed on deck.

I still remember these “elite” commandos who were wearing diapers and some of them urinated on themselves because of their fear when we first began to defend ourselves and resist them. You called your act of piracy Operation Sky Winds. Yet instead, it turned out to be damnation upon you from the skies and heavens above, damnation which will continue to haunt you, along with the spirit of our martyrs.

Your cowards killed ten men in cold blood who have become heroes. The youngest was 19 years old Turkish-American national Furkan Dogan who you even killed as he lay wounded on deck. Yet Divine Justice will not leave you with impunity and the curse of the Mavi Marmara martyrs and children of Gaza who died as you deprived them of their medicines and nutrients will haunt you. The free world has seen your ugly face, which has been exposed further with documentaries such as The Truth: Lost at Sea directed by my fellow shipmate Rifat Audeh, and other documentaries also.

It seems that the cycle of Zionist criminality and savagery is ongoing, as just yesterday you killed a disabled Palestinian man named Iyad Hallaq whose crime was that he ran away from your forces because he was afraid. Maybe the message here is that while oppression and barbarity have similarities everywhere, their fates are also the same. Just as the chapter of piracy has been eradicated from the history books, the chapter of your existence as a disgrace and stain upon humanity will end, and sooner than we expect.