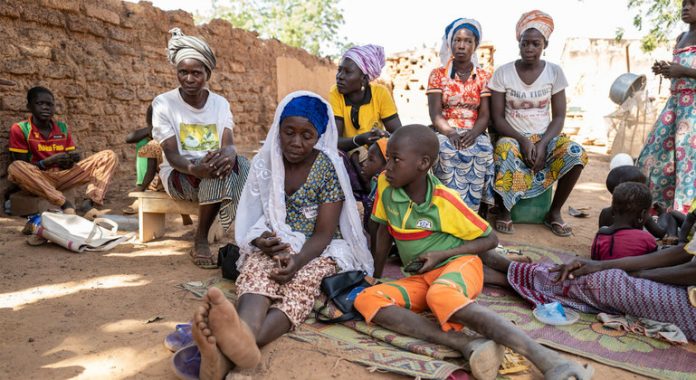 The West African country is now the world’s fastest-growing humanitarian and protection crisis, with five per cent of the population displaced.

One million people forced to flee in Burkina Faso.

Host populations are at a breaking point. They need our help. https://t.co/XeWfGSBTxm

“Attacks by armed groups in the north and east of the country have forced people to move multiple times and are set to push the numbers still higher”, said Babar Baloch, UNHCR Spokesperson in Geneva.

The displaced have found refuge in host communities which are at “a breaking point”; having to share scant resources, while also facing poverty, strained health services and rapidly disappearing livelihoods.

People on the run are also facing the “devastating” impact of the COVID-19 pandemic.

In addition to its own displacement crisis, Burkina Faso has also hosted nearly 20,000 refugees from neighbouring Mali for the past eight years.

Roughly 9,000 were sheltered at the Goudoubo refugee camp but left following attacks and ultimatums by armed groups earlier this year.

Meanwhile, living conditions at Mentao, another refugee camp, have been worsening.

“Most of the 6,000 refugees living there were forced to move to the nearby town of Djibo. Together with the authorities, UNHCR is working to prepare the relocation of refugees to a safer place, where assistance and access to basic services can be provided”, Mr. Baloch told journalists.

UNHCR launched a $186 million appeal in June for Africa’s Sahel region, which includes Burkina Faso, Mali and Niger. The funding will mainly be used to provide lifesaving protection and assistance to refugees, displaced people, returnees and host communities.

The appeal is roughly 53 per cent funded, and UNHCR is currently providing core relief items and shelters at the most overcrowded sites.

Teams are also working on action to prevent and address sexual and gender-based violence, which has been aggravated by confinement and overcrowding, and the agency is rehabilitating schools, and providing access to distance learning.