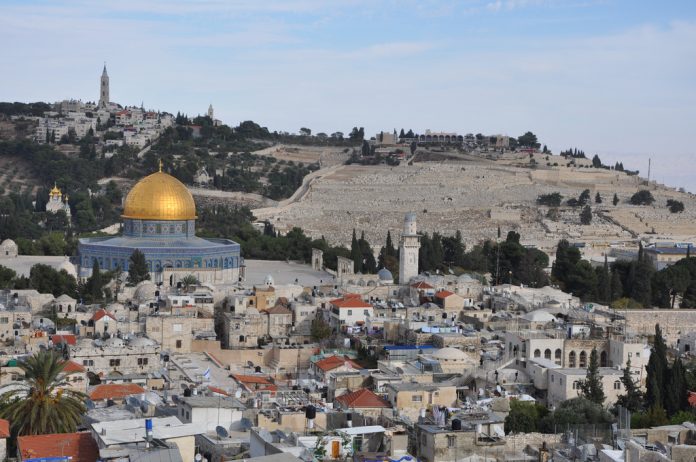 The most stunning rebuke to the Trump Administration’s unilateral effort to legitimize Israeli settlements didn’t come from Arab and European leaders. Over the years, their statements of condemnation have become so predictable that both Israel and the US routinely shrug them off.

Instead, the most significant response came in the form of a letter sent by Members of Congress to Secretary of State Mike Pompeo. Drafted by freshman Congressman Andy Levin of Michigan, the letter was co-signed by 106 other Representatives. While it’s true that the Levin letter isn’t a law and, therefore, will have no real impact on policy, there are several reasons why it is worthy of note.

Most important is the fact that the letter strongly endorses the applicability of the Fourth Geneva Convention to Israel’s occupation of Palestinian lands. The third and final paragraph of the letter to Secretary Pompeo reads:

“This State Department decision blatantly disregards Article 49 of the Fourth Geneva Convention, which affirms that any occupying power shall not ‘deport or transfer parts of its own civilian population into the territory it occupies’…If the US unilaterally abandons international and human rights law, we can expect a more chaotic and brutal twenty-first century for America and our allies…”

This the first time that a substantial number of Members of Congress have embraced the applicability of the Fourth Geneva Convention to the Israeli-Palestinian Conflict. In fact, in 1999 and 2009 Congress passed resolutions denouncing international efforts to hold Israel accountable for its violations of the Conventions.

The principal reason for this Congressional refusal to embrace the Conventions has been in deference to Israel’s insistence that its seizure of Palestinian lands in 1967 was not an occupation. Instead, they refer to the territories as “disputed areas.” That being the case, Israel has long refused to accept that the Conventions apply to Palestinian lands, since if they were to apply, then Israel would be guilty of: “annexing” occupied lands, demolishing Palestinian properties and homes, building settlements for their own citizens on this land, stealing resources from this land, the expulsion of and denial of repatriation of Palestinians who inhabited this land, and whole range of human rights abuses committed against the captive Palestinian population including torture, collective punishment, and illegal detention.

Israel has also used pressure from their Washington lobbyists to ensure that not only would Congress refrain from taking any measure against Israel, they would also avoid using the term “occupied” in reference to Palestinian lands. [In 2016, I served as one of Bernie Sanders’ representatives on the Democratic Party’s platform drafting committee. Our efforts to insert the words “occupation” and “settlements” were met with stiff resistance. We ultimately failed in our efforts.]

In recent years we have witnessed some evolution in the policy debate over the Israeli-Palestinian conflict. Three of the leading Democratic candidates for the presidency have criticized Israeli settlements, denounced Israeli Prime Minister Benjamin Netanyahu’s declared intention to annex parts of the West Bank. These Democrats also link future US aid to Israel to Israeli policies toward the Palestinians. And last week, the House of Representatives passed a bill, that among other things, did support Palestinian statehood and strongly opposed Israeli annexation of any part of the West Bank.

But none of these efforts have gone as far as the Levin letter which in an unprecedented manner holds Israel accountable to international law.

While Democrats have been emboldened on Israeli-Palestinian issues as a result of their disgust with the Trump/Netanyahu marriage, what is impressive about the Levin letter is that it isn’t tied to or focused on Democrats revulsion with both men. Rather, the letter focuses on the importance of the US upholding international human rights law and demands that Israel adhere to its requirements – whoever is in office in Israel or the United States.

A final point about the importance of Levin’s letter was the fact that it was signed 107 Members of Congress. There have been strong principled letters on Israeli-Palestinian issues in the past, but never one that drew the support of so many. While they were all Democrats, the diversity they represented was impressive. There were senior leaders in the party, as well as freshman and there were African American, Latino, Arab Americans and American Jews.

What was troubling was the fact that the Levin letter was largely ignored by the US media. Because it was a letter and not a law, some may have failed to grasp the important shift it represents in the political landscape. These changes have been percolating under surface for years. Now they are breaking out into the open. This story is still being written.