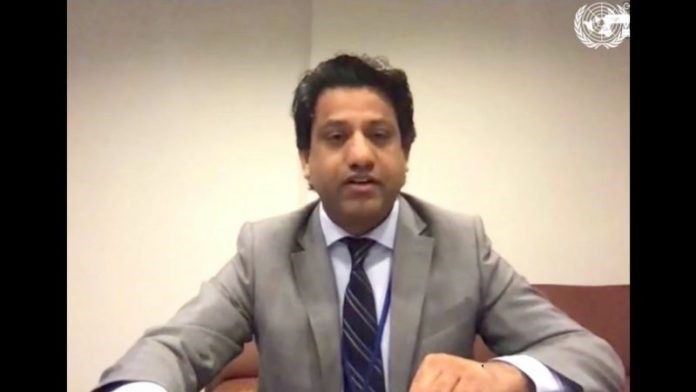 New York (UNA-OIC) – Voicing concern over the increasing number of attacks against UN peacekeepers, Pakistan has underscored the need for ensuring their safety and security as they serve in hot spots around the world.

“We have lost 160 of our bravest peacekeepers over the last six decades, with three of these casualties coming in the last one year,” Aamir Khan, deputy permanent representative of Pakistan to the UN, told the Security Council’s Working Group on Peacekeeping Operations on Tuesday.

As a leading troop contributor to UN peacekeeping operations, he said, Pakistan was, therefore, most interested in the discussions on the safety and security of peacekeepers.

“It is in this spirit that we call for upholding the fundamental principles of peacekeeping,” Aamir Khan said, pointing out that Pakistani troops have served in some of the most successful UN peacekeeping missions, such as Sierra Leone, Burundi, Timor-Leste and Liberia.

Referring to the surge in attacks against the peacekeepers and the rising fatalities, the Pakistani representative stressed the need for the UN to recommit to the protection of its personnel, apply its duty of care to every security incident and ensure that perpetrators are brought to justice.

“This is vital to preserving the sanctity of blue flag,” he said, as also essential to upholding the Security Council resolution 2518, which calls for investigating and prosecuting promptly those responsible for attacks on UN personnel.

With peacekeeping environments becoming volatile, Aamir Khan made some recommendations aimed at strengthening the safety and security of peacekeepers.

These included training in specialized capabilities, such as expertise in counter Improvised Explosive Devices (IED) and mine action as well as critical enablers including multi-role engineers, aviation and medical units that contribute to personnel security;

Addressing gaps between mandates and resources; more impact-driven peacekeeping partnerships for capacity-building and the primacy of politics in establishing and sustaining peace.

The Pakistani representative said that peace cannot be established by peacekeepers alone — it needs to be complemented by mediation processes and political solutions.

In his remarks, Aamir Khan also said that Pakistan, besides being a troop contributor, also hosts one of the oldest peacekeeping missions – the United Nations Military Observer Group in India and Pakistan (UNMOGIP), which monitors the Line of Control in Jammu and Kashmir.

Pakistan, he said, values UNMOGIP’s vital role in maintaining peace and security in the disputed region, and remains fully committed to respecting the group’s mandate as well as to the security and freedom of movement of its personnel.

“Those caught up in protracted conflict see the blue helmets as a lifeline and a source of hope for a free and safe future,” the Pakistani representative said, adding “Let us work together to keep this hope alive.”