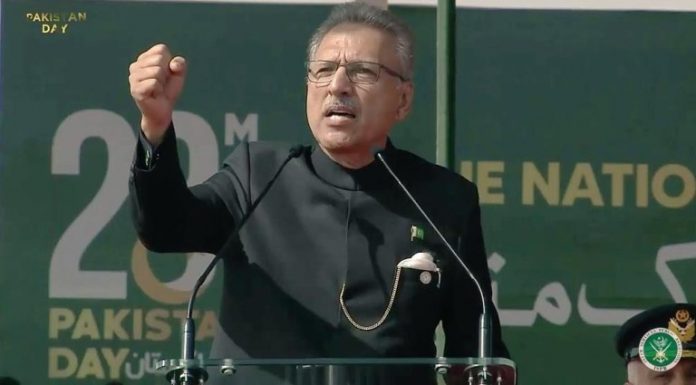 Islamabad (UNA-OIC) – Pakistani President Dr Arif Alvi on Thursday said Pakistan extends a message of goodwill to regional countries for common prosperity, but its intention must not be misconstrued as weakness.
“In case of any misadventure, Pakistan is capable of thwarting it with full force,” President Alvi said in his address at the joint armed forces parade held at the Parade Avenue near Shakarparian Hills.
The March 23 Pakistan Day parade, which was rescheduled to March 25 due to inclement weather, was attended by civil and military leaders, parliamentarians and foreign dignitaries.
The president said Pakistan believed in promoting cooperation in South Asia, which was already facing hindrance in development due to mutual conflicts and discords.
“The goal of national and regional development can only be achieved in the environment of peace and by refraining from all kinds of aggression and exploitation,” he stressed.
Alvi felicitated the nation on Pakistan Day, saying the occasion was a reminder to renew the pledges of religious, cultural and fundamental freedoms.
https://www.app.com.pk/top-news/pakistan-desires-peace-in-region-for-common-prosperity-president/