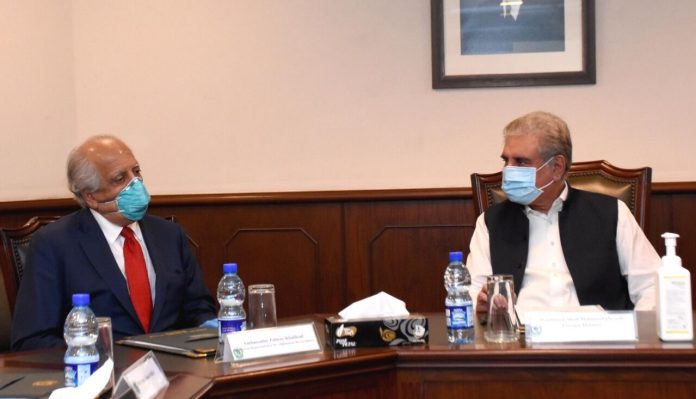 According to a foreign ministry statement, he expressed these views during a meeting with US Special Representative for Afghanistan Reconciliation, Zalmay Khalilzad who called on him in Islamabad on Wednesday.

The Foreign Minister highlighted Pakistan’s positive contribution to the US-Taliban direct talks culminating in the Peace Agreement of February 29, 2020 and stressed that the Afghan leaders should seize this historic opportunity and work together to ensure a comprehensive and inclusive political settlement.

Reiterating that a peaceful and stable Afghanistan is important for peace and stability in the region and beyond, Foreign Minister Qureshi welcomed the latest developments, including announcements on formation of a negotiating team and establishment of High Council of National Reconciliation.

He expressed the hope that release of prisoners would be completed soon to pave the way for the earliest commencement of Intra-Afghan negotiations.

He urged that all sides should make earnest efforts for reduction in violence. He also emphasized that it was important not to let the spoilers undermine or derail the process of Intra-Afghan Negotiations.

Noting the 40 years of hospitality extended by Pakistan to the Afghan refugees, the Foreign Minister underlined the role of the international community for a time-bound and well-resourced roadmap for the return of Afghan refugees to their homeland with dignity and honor.

He added that Pakistan remained ready to engage in endeavours to facilitate closer Pakistan-Afghanistan economic partnership and regional connectivity projects.

Foreign Minister Qureshi conveyed Pakistan’s disappointment that the recently released US State Department’s Country Report on Terrorism 2019 was not factual and it failed to recognize Pakistan’s serious efforts and achievements in the fight against the scourge of terrorism.

It was underlined that the spirit and trajectory of Pakistan-US relations warranted a positive approach — with better understanding and recognition of Pakistan’s concrete contribution to counter-terrorism.

Ambassador Zalmay Khalilzad expressed condolences on the loss of lives in the terrorist attack on Pakistan Stock Exchange in Karachi and extended US support.