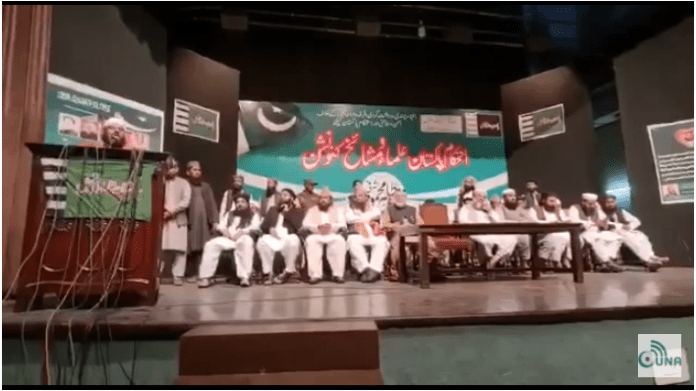 Lahore (UNA-OIC) – The convention of religious scholars and clerics, held on Sunday in Lahore, declared full support to the Kingdom of Saudi Arabia under the leadership of Custodian of the Two Holy Mosques King Salman and Crown Prince Mohammed bin Salman at all times and under all circumstances.

The conferees emphasized their complete rejection of the inaccuracies, grave errors and unacceptable conclusions contained in the report submitted by the US intelligence to Congress regarding the killing of Saudi citizen Jamal Khashoggi.

They also affirmed that the journalist Khashoggi case has utterly ended in the judicial aspect after the end of the investigations and the issuance of final Sharia rulings by the Saudi courts, which met the requirements of justice, and won the full acceptance of all countries and concerned institutions, as well as the full approval and satisfaction of Jamal Khashoggi’s family and sons.

The participants, in the convention, whose number exceeded 1,000 from across Pakistan, expressed their deep regret for the baseless propaganda against the country of the Two Holy Mosques and the Saudi leadership.

Addressing the convention, Chairman of Pakistan Ulema Council (PUC) Hafiz Muhammad Tahir Mahmood Ashrafi said, “The Pakistan-Saudi Arabia relationship is based on faith, and for us, targeting Harmain Al-Sharifain and its leadership is a red line.”

He added that the relations between the two countries are based on solid foundations, experiences, alliances, partnerships and historical agreements that enhance their confrontation and response to all forms of successive challenges and shocks.

“Whatever the circumstances and changes, the distinguished Pakistani-Saudi relations will continue to see steady development, without paying attention to political influences and fluctuations,” said Ashrafi, stressing that the Saudi leadership will continue to be highly appreciated and respected by all leaders, scholars and people of Pakistan as well as the Arab and Islamic world.