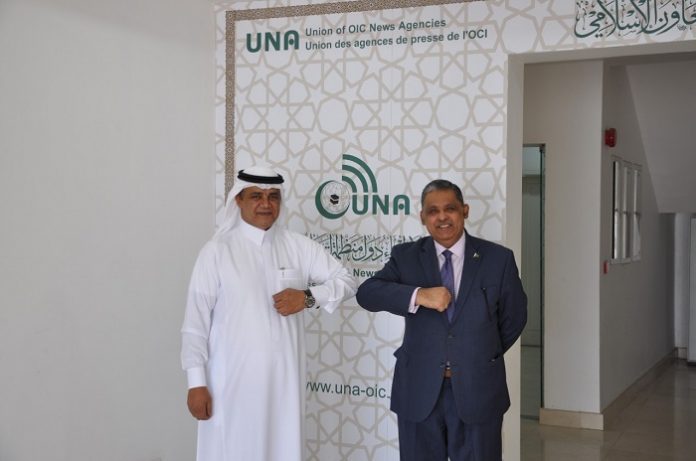 Jeddah (UNA-OIC) – Ambassador of Pakistan to Saudi Arabia and Permanent Representative to the Organization of Islamic Cooperation (OIC) Rizwan Saeed Sheikh on Monday visited the Union of OIC News Agencies (UNA), where he was received by Acting UNA Director-General Mohammed Abd Rabbo Al-Yami.

The Pakistani envoy listened to an explanation of UNA’s vision for the coming years, which focuses mainly on the role of the Union as a major media platform for member states, and the advancement of the media industry, based on Islamic and media values ​​that encourage transparency, credibility and tolerance.

Al Yami highlighted the role of UNA in providing strategic media consultancy to member states through representatives of the official national news agencies, in addition to its plan to hold, during the coming period, a series of training sessions on media coverage for both sexes.

For his part, the Pakistani ambassador commended UNA’s efforts in shedding light on issues of concern to the Islamic world. He also promised to provide the Union with the necessary support to ensure the achievement of its vision.