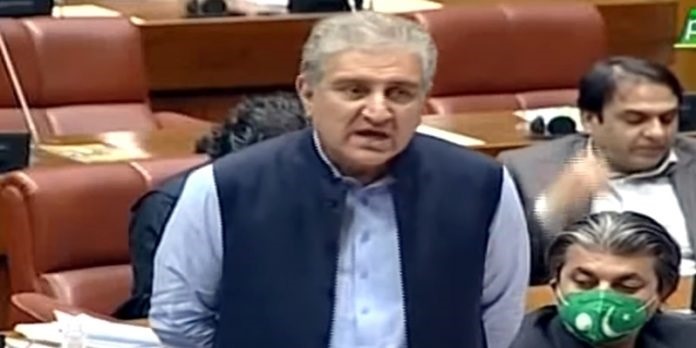 Islamabad (UNA-OIC) – Pakistani Foreign Minister Shah Mahmood Qureshi on Tuesday stressed the need for continuous efforts to awaken the world conscience, both on humanitarian and ideological grounds, for resolving the Palestine issue on a permanent basis.

Qureshi was winding up debate in the Senate on a motion regarding systematic Israeli assault on the Palestinian worshippers at Al-Aqsa Mosque and Gaza during the holy month of Ramadan, and the apartheid state’s terrorism and mass murder in Palestine, as well as the ongoing violent and illegal occupation of Palestinian lands in the world’s worst example of settler colonialism.

The foreign minister said durable peace in the Middle East was not possible without resolving the Palestine issue, stressing the need for evolving international consensus to formulate a comprehensive strategy for the purpose. He said Pakistan played a vital role in achieving a ceasefire in Gaza to protect the precious human lives of Palestinian people.

Qureshi added that Palestine was the oldest item on the agenda of the UN Security Council (UNSC). He also highlighted the efforts of Pakistan during the UNSC meeting for an end to Israeli violence and barbarism against the innocent Palestinians in Gaza.

The top Pakistani diplomat said the current crisis emerged on the 27th of the blessed month of Ramadan after the attack on the faithful, who were going to offer prayers at Al-Aqsa Mosque. The crisis triggered as the Israeli police forcefully evicted the Palestinian families from their homes in Jerusalem’s Sheikh Jarrah neighborhood.

Prime Minister Imran Khan, on 28 Ramadan, during his visit to Saudi Arabia, urged the Organization of Islamic Cooperation (OIC) to act over the rising incidents of Islamophobia, Qureshi recalled.

The foreign minister said the Federal Cabinet headed by Prime Minister Imran Khan had approved sending humanitarian assistance for the Palestinian brethren. They would contact the Egyptian foreign minister for the purpose as Egypt was the only route to sending any kind of support to the besieged Palestinians, he added.