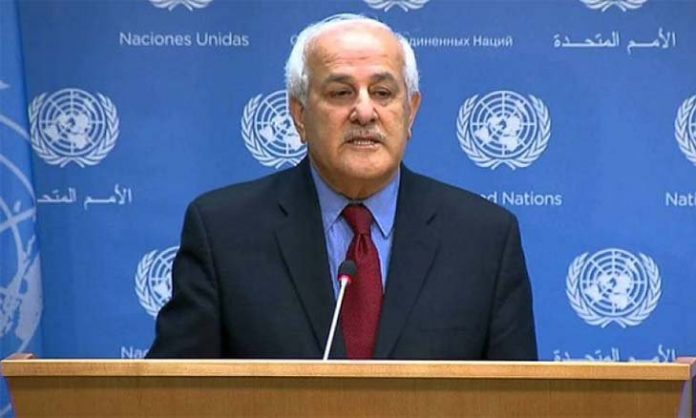 Ramallah (UNA-OIC) – Palestine regrets that the latest annual report of the UN Secretary-General on Children and Armed Conflict once again failed to rightly include Israel’s occupation forces on the list of parties that commit grave violations against children, said Riyad Mansour, Permanent Observer of the State of Palestine to the United Nations.

This failure persists despite the thorough documentation and proof of Israeli crimes against Palestinian children, crimes that are not only ongoing but escalating, including the killing of over 69 Palestinian children in just the past two months, Mansour told the UN Security Council High-level Meeting held via video conference.

The State of Palestine regrets that the Secretary-General’s report disregards the overwhelming body of evidence of Israel’s grave violations and crimes against Palestinian children, he said, adding that exempting Israel from its crimes is inconsistent with the normative framework of international law and resolutions that are the foundation of and must guide all work by the United Nations, including the object and purpose of the Security Council resolutions to, inter alia, enhance the protection of children.

Such exemption only emboldens Israel’s impunity, permitting it to continue committing these crimes without regard or fear of international censure or consequences, the Palestinian ambassador said, pointing out that this willful omission of Israel from the list is also a grave derogation of the responsibilities entrusted to the Secretary-General, which we urge him to rectify without delay.

Palestinian children are entitled to their human rights, they are entitled to protection, safety, dignity, and freedom. The State of Palestine will continue to expose every Israeli crime committed against Palestinian children and will use all available means within international law to ensure that Israeli officials, military commanders, forces, and colonial settlers are held accountable for their crimes to the fullest extent of the law.