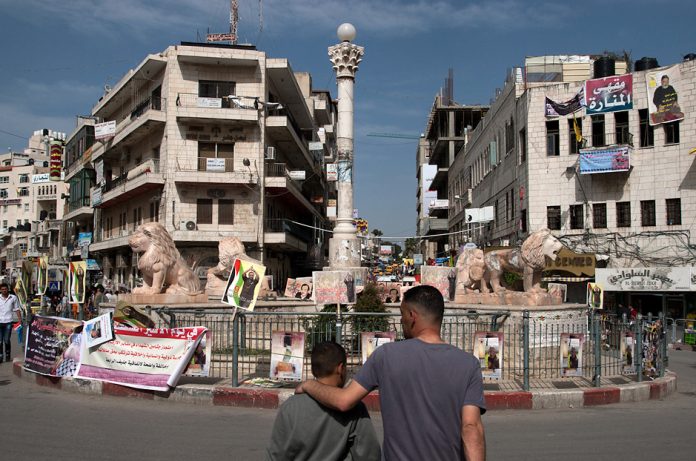 A recent protest action by Palestinians outside the South African mission in Ramallah, conveyed a forthright and damning message: “Why have you dumped us? We stood alongside you in fighting apartheid!“.

It was an unprecedented move to declare their frustration and anger at the gates of South Africa’s embassy in Occupied Palestine.

The protesting crowd was made up of a broad range of civil society organizations. From the Palestinian Popular Struggle Coordination Committee to Stop The Wall and included high profile activists including Bassem al-Tamimi from Nabi Saleh, Munther Amira and Salah Khawaja.

“We are protesting today…against recent acts of betrayal of this struggle by some South African government officials. We are confident that many of you, the people of South Africa, will agree with us that Palestinians deserve better from your current government. The Palestine Liberation Organization (PLO), the sole legitimate representative of the Palestinian people, was among the strongest and most reliable supporters of your own liberation struggle during the darkest era of apartheid, while Israel was the apartheid regime’s best friend.

“Please consider the following four instances of your government’s undermining of our struggle and of its own principles of supporting human rights worldwide:

“1. According to Israel’s Ministry of Foreign Affairs, a ‘pre-arranged inter-ministerial’ meeting between Israel’s Minister of Regional Affairs, Tzachi Hanegbi, and the ANC’s International Relations Sub-Committee headed by South African Minister Edna Molewa has recently taken place. Hanegbi, an ardent advocate of war crimes against Palestinians, has recently threatened the Palestinian people with a ‘new Nakba’, referring to the premeditated ethnic cleansing of a majority of the indigenous Palestinians around 1948 to create a Jewish-majority settler colony in their homeland. Hanegbi voted this past January in favor of a racist anti-African law, which sought to compel non-Jewish African refugees to self-deport by seizing their wages.

“2. South Africa’s Department of International Relations and Cooperation has recently given a gift on behalf of the South African people to the departing Israeli ambassador Arthur Lenk, ignoring the Israeli government’s repeated vicious — and sometimes overtly racist — attacks on the African National Congress (ANC).

“3. South Africa’s Ambassador to Tel Aviv Sisa Ngombane has publicly supported an Israeli organization promoting the Israeli military forces and spoken of ‘pressuring’ the South African president and government ‘to send ministers to Israel.’ Furthermore, he has infamously claimed that Israel was justified in its 2014 assault on Palestinians in the occupied and besieged Gaza strip, when more than 500 Palestinian children were massacred. Instead of recalling him, the South African government has extended Ngombane’s term till the end of 2018.

“4. The former South African Director General of International Relations and Cooperation and now SA Ambassador to the UN, Jerry Matjila, met in 2016 with his far-right Israeli counterpart in an attempt to normalize relations with the Israeli regime.”

In addition, their demand is to “immediately downgrade the South African Embassy in Tel Aviv to a liaison office” until Israel abides by international law. The downgrade, the Palestinians explain in their letter, “is a most basic gesture of ending complicity in Israel’s decades-old violations of [Palestinian] human, civic and national rights.”

Will their message reach the Jacob Zuma presidency and if it does, will it be filtered? Will it be dismissed as not reflective of popular opinion? Or will the relevant ministry and the entire department at DIRCO, finally look in the mirror and introspect?

If they do, is it far-fetched to conclude that their policy positions on Palestine will be found to be wholly tilted towards Israel? If so is it likely that they will call for a complete overhaul of policies which have disadvantaged Palestine’s freedom struggle ever since the post-apartheid era?

Knocking on South Africa’s Ramallah mission coincides with dramatic changes occurring in the wider Middle East region. And none of the changes favor Palestine.

Top of the list is the Saudi betrayal. It represents the most dangerous challenge to confront Palestine’s long walk to freedom. Clearly, at odds with the Arab street, the inexperienced power-hungry Crown Prince Mohammad bin Salman (MBS), has cast his lot with Israel.

By doing so, he has reconfigured priorities for Saudi Arabia and hopes to get a buy-in from the rest of the deeply fractured Arab League. It only requires a cursory glance at the policies pursued by MBS, to understand that Palestine is merely an irritant for him.

Turning his focus away from the devastation resulting from the Naqba, and frog-marching the rest of the Arab League to follow him is evidence of the single-minded determination by MBS to ally with Israel at the expense of Palestine.

Between the treasonous conduct of Saudi Arabia and the duplicitous role played by South Africa, actors such as Sisi’s coup regime Egypt and the UAE are all complicit in allowing Israel a free hand.

The free passage to colonize, expand settlements, tighten occupation, torture, detain and kill at will is a bonanza for apartheid Israel.

The protest against South Africa’s misguided policies is a timely yet crucial reminder that unless drastic changes are adopted and appropriate action was taken, Israel’s free passage to treat Palestinians with contempt will continue.