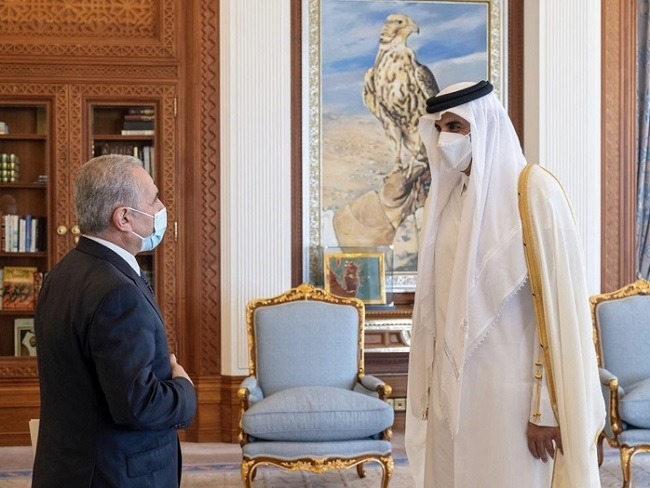 Doha (UNA-OIC) – Palestinian Prime Minister Mohammad Shtayyeh on Monday discussed with Emir of the State of Qatar Sheikh Tamim bin Hamad Al-Thani, during an official visit to Doha, the latest political developments, the situation in Jerusalem, and the reconstruction of the devastated Gaza Strip.

During the meeting, which was attended by Foreign Minister Riyad Al-Maliki, Government Spokesman Ibrahim Melhem and the Ambassador of the State of Palestine to Qatar Munir Ghannam, the Prime Minister briefed the Emir of Qatar on the diplomatic moves regarding the resumption and progress of relations with the new US administration, and its different policies from the previous administration.

He called for filling the current political vacuum by proposing a political path that ends the Israeli occupation and leads to the implementation of international legitimacy resolutions through the International Quartet, and the establishment of a Palestinian State with Jerusalem as its capital.

They also discussed the reconstruction of the devastated Gaza Strip, stressing the importance of maintaining calm and ensuring that the aggression against Palestinians is not repeated, especially in the Strip, as well as reactivating the joint higher committee between Palestine and Qatar, and raising the trade balance between the two countries.

Shtayyeh also briefed the Emir on the situation in the city of Jerusalem, including the ethnic cleansing and racist practices to which it is exposed, and the attempts to forcibly expel and displace its residents, especially in Sheikh Jarrah and Silwan neighborhoods, in addition to the attempts to temporally and spatially divide Al-Aqsa Mosque.

For his part, Sheikh Tamim expressed Qatar’s continued support for the Palestinian cause. He also hoped for the completion of Palestinian reconciliation, which he stressed constitutes a strong factor for the just cause of the Palestinian people.