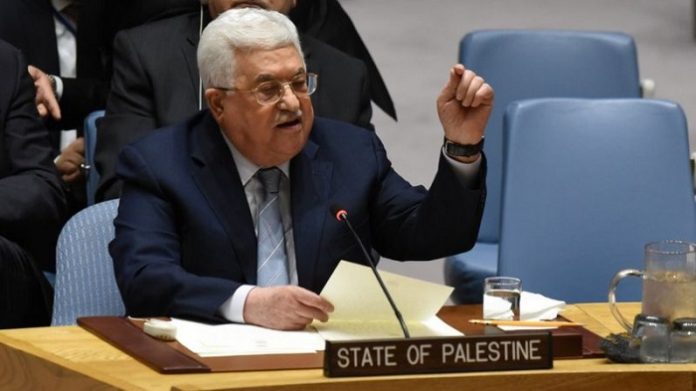 Abbas sent a letter to UN Secretary General António Guterres, urging him to hold urgent consultations in coordination with the Middle East Quartet and the UN Security Council on convening an international Middle East peace conference with full powers and with the participation of all concerned parties. He cited the international consensus on holding such a conference that emerged during last Monday’s UN Security Council session.

“The majority of the superpowers called for supporting our proposal, which we presented in our speech before the UN General Assembly’s current session, and called on you to start preparing at the beginning of next year for an international conference for peace in the Middle East based on international law and UN resolutions in order to resume negotiations based on the adopted international terms of reference,” Abbas stated in the letter.

The Palestinian president underscored the importance of launching a genuine peace process to achieve the two-state solution, which would contribute to the maintenance of security and peace throughout the world. He said that holding such a conference would “pave the way to engage in a serious peace process based on international law, UN resolutions and relevant references.

The conference “has to lead to an end to the Israeli occupation and help the Palestinian people achieve their freedom and independence within the State of Palestine, with East Jerusalem as its capital, on the 1967 borders, and resolving all final status issues, particularly the refugee issue, based on the UNGA Resolution 194,” he added.

Emphasizing the importance of multilateralism, Abbas stressed that it was not sufficient to pay lip service to the two-state solution, but there was a need to formulate a genuine multilateral approach to end the conflict through convening the conference.

He renewed his call for setting up a multilateral international mechanism to help both parties to re-launch a meaningful political process to solve the final-status issues within a specified timeframe and based on the principle of international law and the relevant UN resolutions.