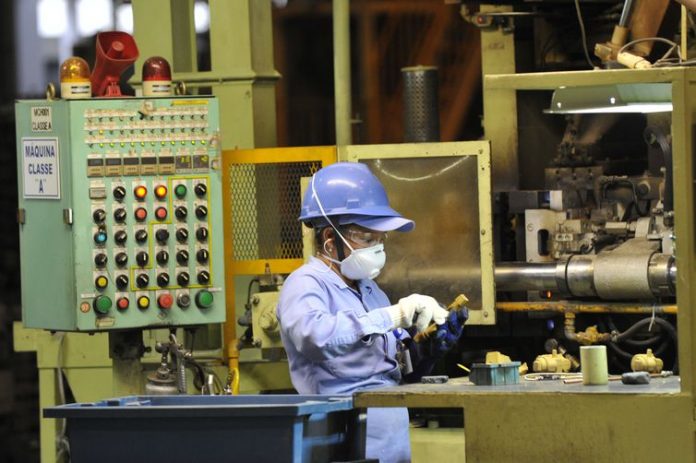 Approximately seven (69%) of every ten companies have recently lost revenues due to the pandemic caused by the novel coronavirus, according to a survey commissioned by the National Confederation of Industry (CNI), with 402 executives from medium (50 to 249 employees) to large (250 or more) firms, countrywide.

Conducted over the phone between June 18 and 26, the survey also found that 16 percent said their income remained the same, and 14 percent stated it increased.

The reduction in revenues was seen proportionately more among executives from large companies (76%) than among those from medium firms (68%).

In a region-based comparison, the sharpest plunge in gross earnings was reported in the Southeast (73%). In the South and the Northeast, the contraction was 69 percent. Less than half (49%) of the responses obtained from the North and the Central-West showed a negative impact in revenues.

The data collected also reveal that 65 percent of medium and large companies had their output reduced or brought to a halt.

Companies hit by the pandemic

Some nine of every ten companies were affected one way or another by the COVID-19 pandemic, executives declared. For 40 percent, companies were “strongly affected.” Sixteen percent declared their businesses were “affected,” 14 percent said “somewhat affected,” 16 percent “little affected,” and seven percent “very little affected.” Five percent stated “not affected at all,” with two percent not knowing or not willing to answer.

The situation described by respondents was worse among large businesses than among medium ones. Sixty-two percent of large companies declared they were “strongly affected” or “affected,” whereas this percentage sinks to 55 percent among medium firms.

Regionally speaking, 42 percent of interviewees in the North and the Central-West said their businesses were “strongly affected” or “affected.” In the South, this proportion stands at 60 percent, 58 percent in the Southeast, and 56% in the Northeast.

Changes in the outlook

The study ascertained with 68 percent of executives that the current landscape assailed by the pandemic and an economic crisis led to a change in some important aspect of the company, be it in connection with their workers, production line, sales, logistics, supply chain, and stock management.

The CNI survey also brought to light that 66 percent of respondents ascribe a “high” (43%) or “very high” (23%) degree of importance to innovation in the productive process. However, no consensus exists on what innovation really is. Among the answers collected are “doing things differently,” “doing things better,” “creating something from a specific need found in the market,” “seeking new technology,” or creating “new ways of aggregating value.”

Most executives heard (83%) argues that the post-COVID scenario will demand innovation if industry is ever to expand or survive at all in the market. In their view, the production line must be prioritized in receiving innovation (58%).

“This crisis is showing us the importance of investing in innovation. Emerging from the crisis requires investment in innovation. The post-pandemic world acknowledges the value of innovation,” said Gianna Sagázio, CNI’s director for innovation. “Innovation strengthens industry and industry creates more quality employment and quality of life for the people. There is no developed country without a sold industry,” she added in an interview with Agência Brasil.

Along with the publication of research data, CNI announced it forged an unprecedented partnership with an open global innovation platform, created by an Israeli company active in several countries.

Open innovation initiatives can connect global demands from companies and solutions on a global scale, at low cost, and in collaboration with enterprises, universities, governments, as well as investment funds.

The platform selected by CNI, Sagázio’s argued, “can boost the innovation process.” She believes Brazilian businesses must be mindful of the “fourth industrial revolution,” which includes the digitalization of the industry and is a decisive factor in the future of both the companies and the economy. “If Brazil has no robust public policies on innovation and fails to coordinate government initiatives alongside the business sector, we may be left behind,” she declared.

The director described the platform as “a way to have take a more careful look into what’s going on across the globe and to be connected, gain time, and speed up the process of insertion into the industrial revolution we’re witnessing right now.”