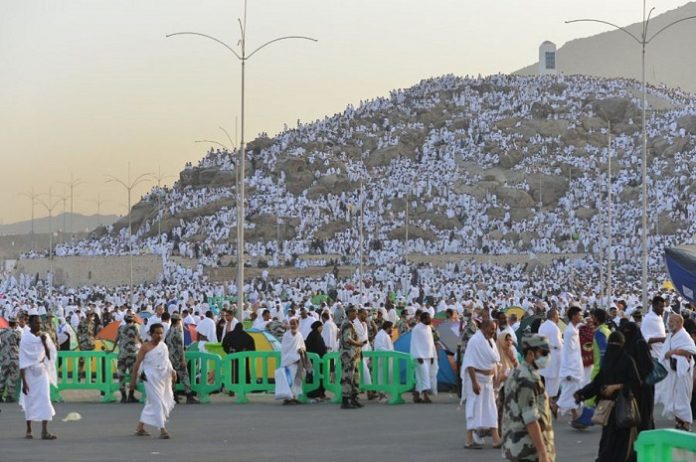 Ministry of Hajj and Umrah Spokesman Eng. Hisham Saeed revealed that the transportation of the pilgrims from Mina to Arafat began at five Monday morning, pointing out that the pilgrims are transported by buses according to the grouping plans through the routes designated for them to the Arafat site.

He explained that nearly 400,000 square meters were prepared in the Arafat plains to receive pilgrims, saying that this area is equivalent to five square meters for each pilgrim, in order to improve the services provided to the pilgrims and to apply the precautionary measures and health protocols agreed upon for this year’s pilgrimage.

The spokesman disclosed that the “Smart Hajj Card” was issued this Hajj season with the view to tightening the process of grouping and real-time monitoring, as well as making any quick intervention in the event of a breach of this system. He stressed that, so far, no defect has been detected in this system.

In turn, President of the General Syndicate of Cars Abdulrahman bin Mayouf Al-Harbi told the Union of OIC News Agencies (UNA) that by nine o’clock this morning, all this year’s pilgrims, totaling 60,000, have been transported to the Arafat area.

Al-Harbi stated that more than 1,600 buses, equipped with all safety requirements, were used for carrying the pilgrims from Mina to Arafat. He pointed out that these buses are accompanied by 1,400 guides and leaders to direct them along the routes and to ensure that the pilgrims abide by the precautionary measures to combat the coronavirus.

The pilgrims ascend to Mount Arafat from sunrise to sunset in reflection and prayers. This moment may be described as “standing before Allah Almighty” and is considered a dignifying ritual in which pilgrims seek forgiveness.

At the Namirah Mosque in Arafat, the pilgrims perform combined and shortened Dhuhr and Asr prayers and attend the Hajj sermon, following the steps of Prophet Muhammad (peace be upon him), who delivered his last sermon on the 9th of Dhul-Hijjah, ten years after he migrated from Makkah to Madinah.

After sunset, the pilgrims start flocking towards Muzdalifah, where they pray Maghrib and Isha combined and shortened with one call to prayer and two iqamah upon their arrival.