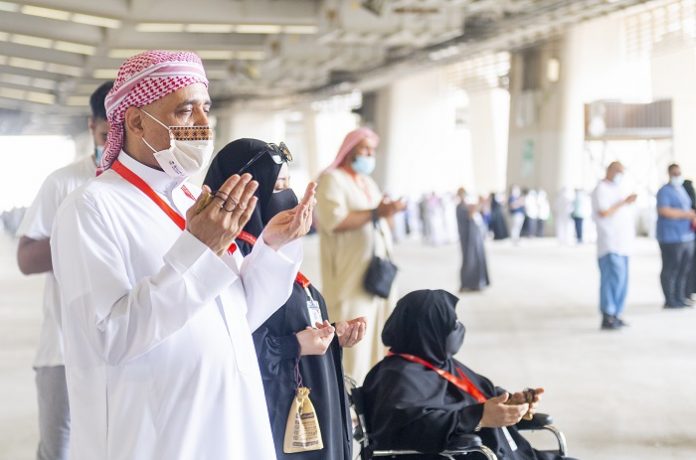 Makkah (UNA-OIC) – The pilgrims completed the Hajj rituals on Friday, 13th Dhu al-Hijjah, the third day of Tashreeq, after stoning pebbles at the Jamarat and performing Tawaf al-Wada (farewell), which marks the end of this year’s Hajj season.

The Hajj activities witnessed the application of the highest precautionary measures to ensure the safety of pilgrims, and resulted in a successful Hajj season that was free of coronavirus infection and any other epidemic diseases.

Chairman of the General Syndicate of Cars Abdulrahman bin Mayouf Al-Harbi told the Union of OIC News Agencies (UNA) that 7,200 pilgrims, who opted to stay in Mina until the 13th of Dhul al-Hijjah, were transported on Friday from Mina to the Makkah Grand Mosque by buses, so that they could perform Tawaf al-Wada, the final ritual of the pilgrimage. He noted that the majority of the pilgrims, numbering 60,000, preferred to rush to depart Mina on Thursday, after stoning pebbles at the three Jamarat pillars.

The Civil Defense Directorate intensified its readiness throughout the Jamarat Bridge and the surrounding squares, in order to implement the Civil Defense Plans and provide humanitarian services during the performance of the stoning ritual.

The Saudi Red Crescent Authority (SRCA) also provided 14 emergency centers with more than 134 SRCA health practitioners in Mina and the other holy places.

Mina Al-Wadi Hospital – which has a bed capacity of 85 beds as well as 24  beds in the emergency department, six beds for cardiopulmonary resuscitation, four beds for suspected cases of respiratory diseases, in addition to four beds for dialysis – has been equipped with all medical requirements and cadres. Additionally, 25 beds have been allocated for intensive care and 22 beds for heat stress cases. The hospital operates 24 hours a day to serve pilgrims with the support of 240 medical, technical, nursing and administrative staff.

The Presidency of the Two Holy Mosques worked on organized grouping schedules to receive the pilgrims at the Makkah Grand Mosque to perform Tawaf al-Wada, by applying physical distancing procedures between the pilgrims, and placing indicative ground posters on the courtyards of the Grand Mosque and the Mataf area, to control the pilgrims’ movement in a safe and healthy manner.

The presidency also completed preparation of the Mataf floors as well as the ground and first floors, totaling 25 lanes in the Mataf, four lanes on the ground floor, and five lanes on the first floor, in addtion to allocating paths for people with special needs, in accordance with the precautionary measures. It further allocated specific entry gates and others for exit, to ensure smooth movement of crowds.

The Saudi Ministry of Islamic Affairs, Call and Guidance has sent more than 900,000 awareness messages (sms) to pilgrims, in more than 10 languages, urging the pilgrims to abide by the precautionary measures in order to preserve their health and safety.

Saudi Arabia’s General Authority of Civil Aviation (GACA) has completed its integrated operational plan to bid farewell to departing pilgrims to their places of residence, after they completed this year’s Hajj rituals, through King Abdulaziz Airports in Jeddah and Prince Mohammed Bin Abdulaziz International Airport in Madinah.

Saudi Minister of Health Dr. Tawfiq Al-Rabiah announced on Thursday the success of the 1442 AH Hajj Health Plan, stressing that this Hajj season was free from outbreaks of coronavirus and other epidemic diseases.

He said the agencies involved in serving the pilgrims have made great efforts to implement the Hajj Health Plan to ensure the safety of pilgrims and prevent the spread of infection among them in light of the coronavirus pandemic,” the minister said in a press briefing.

“By the grace of Allah, these early efforts and precautionary measures contributed to dealing with the health situation of the pandemic during this year’s Hajj season, which necessitated limiting the performance of Hajj to 60,000 pilgrims who completed the vaccine, which had a tangible impact on preserving the health and safety of pilgrims,” he added.

It is noteworthy that Saudi Arabia has introduced during the current season a number of technological applications, which enabled the pilgrims to perform their Hajj rituals easily and comfortably, and fulfilled the requirements of preventive precautions.