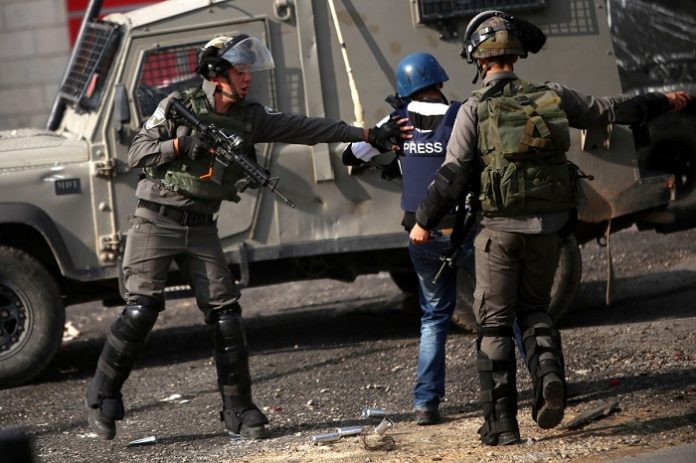 Ramallah (UNA-OIC) – The Palestinian Journalists Syndicate (PJS) documented 337 crimes and attacks by the Israeli occupation authorities against journalists and media freedoms in the occupied Palestinian territories.
These violations, which were documented during the past weeks of tensions and the latest 11 days of Israeli aggression on the besieged Gaza Strip, amount to war crimes, PJS stressed in a statement issued on Tuesday.
The syndicate monitored and documented 337 violations against journalists, of which 110 occurred in Gaza and 227 in the West Bank – double the number reported from the start of this year until the first of May, the statement said.
It added that three journalists were killed during the latest 11 days of Israeli aggression on Gaza, 41 offices and media institutions completely destroyed, and 32 partially destroyed, while 27 journalists’ homes were targeted with missiles.
In the West Bank, 227 violations against journalists were documented, including detention of journalists, prevention of media coverage, and deliberate targeting of journalists, the statement said, adding that 31 journalists were shot and injured, 32 suffered tear-gas suffocation and others sustained injuries after being deliberately targeted with stun grenades.
The syndicate documented 12 arrests, 15 cases of confiscation and destruction of equipment, in addition to banning journalists’ access to Jerusalem.