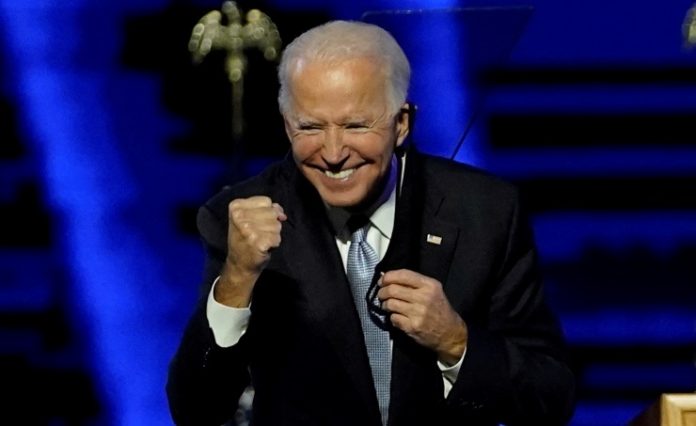 Washington (UNA-OIC) – Democrat Joe Biden was declared the winner of the US presidential elections 2020, on Saturday night, even as incumbent President Donald Trump refused to concede.

President-elect Biden has pledged to unite the country as he called it ‘a time to heal in America’, after his historic victory over Trump in a closely-fought presidential election that attracted a record number of Americans to cast their votes.

“The people of the nation have spoken, they have delivered us a clear victory,” Biden told supporters in his victory speech in his hometown Wilmington, Delaware. “I pledge to be a president who seeks not to divide, but to unify; who doesn’t see red states and blue states, only sees the United States,” he added.

“I sought this office to restore the soul of America, to rebuild the backbone of this nation, the middle class and to make America respected around the world again, and to unite us here at home,” the president-elect stressed.

Vice President-elect Kamala Harris took to the stage in Wilmington ahead of Biden’s first official speech since clinching the US election.

“When our very democracy was on the ballot in this election, with the very soul of America at stake, and the world watching, you ushered in a new day for America,” Ms. Harris said while introducing President-elect Biden.

She thanked black, Asian, native and white women “throughout our nation’s history have paved our way for this moment tonight … all the women who have worked to secure and protect the right to vote for over a century”.

Meanwhile, the Trump campaign blitzed state and federal courts with roughly a dozen new lawsuits, most attempting to halt the vote-counting process or disqualify tranches of ballots. The majority of the Trump campaign’s lawsuits were filed in Pennsylvania, Nevada, Georgia, and Michigan – states where either Biden’s margin of victory is relatively slim, or where a winner has yet to be called.

After Biden declared victory on Saturday, President Trump seemed poised to continue to fight in court. In comments from the White House, Trump vowed to pursue a lawsuit in Pennsylvania. But legal experts say his chances of meaningfully challenging the election are dwindling.

Many of Trump campaign’s suits filed last week were dismissed for lack of evidence, and the ones that have gained some traction are unlikely to change the outcome of the presidential vote.