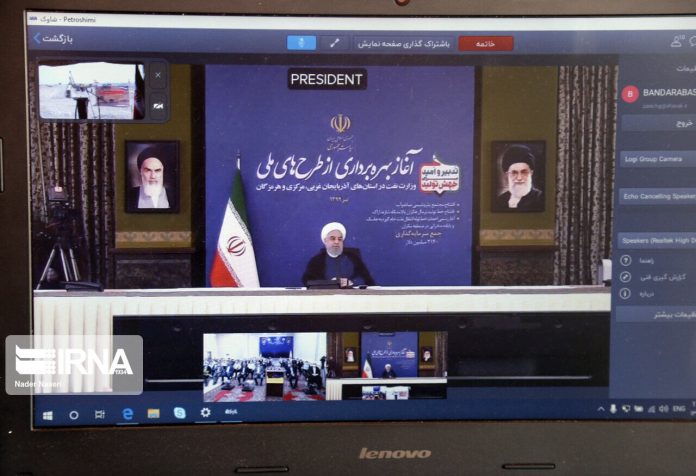 Yesterday, two oil projects in the refining and petrochemical sectors were put into operation. In addition to the operation of these two projects, the construction of a crude oil pipeline from Gore to Jask was also launched in the presence of the President via a video conference.

“Those who imposed sanctions on Iran, i.e. the US and the Zionist regime, are fully aware that they cannot impede Iran from development and boosting production,” President Rouhani said, addressing the inauguration ceremony of three major oil projects via a video conference.

3 projects that have or will have a total investment of 2 billion and 140 million dollars in the country.

The inauguration of two oil projects and the official start of the construction of the most strategic plan underway by the government yesterday sent a message to the imposers of the sanctions that the Iranian oil industry cannot be halted.

Out of these three projects, of course, the construction of a crude oil pipeline from West Karun to the Makran coast is of particular importance which according to the Supreme Leader of the Revolution, the plan is the most strategic plan of the government, because, in addition to its economic benefits, it will allow Iran to bypass the Strait of Hormuz to export its oil.

In fact, the implementation of the Gore-Jask crude oil pipeline project aims to create a capacity of transporting one million barrels of crude oil per day, storing and exporting it through the new Jask terminal, ensuring the continuity of crude oil exports, decentralizing export and diversification terminals and sustainable development and job creation on the shores of Makran.

This strategic plan is an all-Iranian plan implemented by domestic contractors, and the maximum use of the power of Iranian manufacturers and domestically made goods is one of its features.

In addition, oil storage facilities and refinery and petroleum refinery projects will be built at the Jask terminal, the cost of which has not been announced which will be invested by the private sector.

The project, with a total progress rate of 39 percent, is all Iranian, with as much as 95 percent of the equipment provided by Iranian contractors and manufacturers.

So far, however, the government has been facing a shortage of oil revenues due to sanctions, but it has not taken the plan out of its priorities, and 860 kilometers of road construction operations have been carried out.

440 km of sour oil-compatible pipes have been built based on the domestic capacity of domestic factories, of which 350 km have been transported to the workshops of this project and 260 km have been welded.