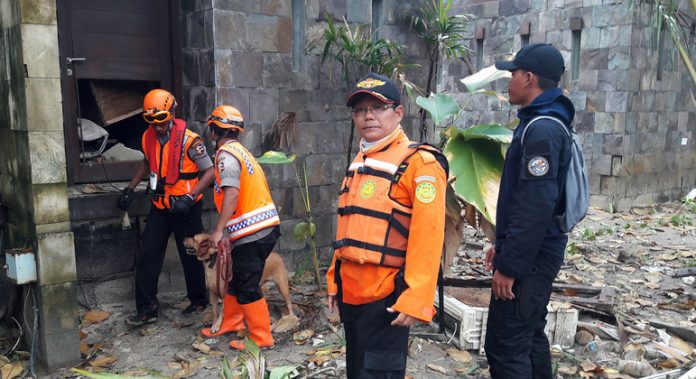 Mr. Haryono was born in Klaten, a small town in Central Java, near Mount Merapi. Many people live on the flanks of the mountain, even though it is the most active volcano in the country, and has claimed many lives during its frequent eruptions.

Mr. Haryono shares his story as part of the #RealLifeHeroes campaign, by the UN Office for the Coordination of Humanitarian Affairs (OCHA), ahead of this year’s World Humanitarian Day, on 19 August.

“When I was young, I dreamed of being a soldier, because I thought that soldiers are tough, brave and loyal. Because of my poor eyesight, I had to give up that dream, and instead joined the Ministry of Transport after graduating from college.
Whilst there, I found out about maritime search and rescue (SAR) and realized that saving the lives of others is a very noble profession. Rescuers would fight to save people they don’t know, and even sacrifice themselves in the attempt. Today, I’m the Deputy Director of Search and Rescue at Indonesia’s Search and Rescue Agency.

Living in the ‘ring of fire’

Growing up in Klaten, disaster is something usual for me. The threats to my hometown don’t only come from Mt Merapi, but also from earthquakes. Situated in “the ring of fire”, an area of the Pacific Ocean Basin which sees many earthquakes and volcanoes, Indonesia is a disaster-prone country. The Search and Rescue Agency was set up in 1972, the year I was born, to provide 24-hour assistance, in case of aviation and maritime accidents, natural disasters as well as other life-threatening situations.

The most shocking earthquake to hit my region struck on May 27, 2006, claiming some 5,800 lives, and causing severe damages to buildings. Another shocking volcanic strike on October 26, 2010 when Mount Merapi erupted, killing around 353 of Klaten’s inhabitants. I saw with my own eyes how such a catastrophe can change someone’s life, the desperation and hopelessness when family members and property are lost. At these moments, they need the assistance and care of others to rise up again.

Working as a humanitarian has taught me about caring, empathy, cooperation, and brotherhood, regardless of race and nationality. I’m 47 now, which might sound too old to be a rescuer, but what matters is having a strong spirit, and the will  to give the best service to other people who are in the need of assistance, particularly, those whose lives are in imminent danger.

Saving lives is not a matter of heroism, it is about our commitment to humanity, and making an effort to give back, and giving others the opportunity to live their lives. There is no happier moment than when you can return someone to their family, alive.