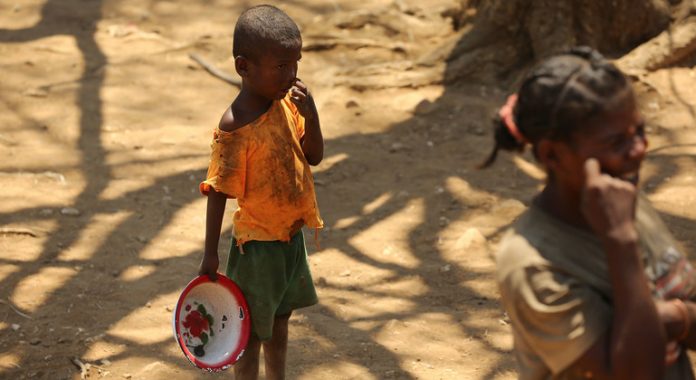 The figure is three times the number projected mid-year, with women and children comprising most of those experiencing “crisis” or “emergency” hunger conditions.

The UN agency pointed out that Madagascar already had the world’s 10th highest rate of stunting, as almost half of all children under the age of five suffer from chronic malnutrition.

“As hunger numbers rise, so does the proportion of families who are resorting to crisis-coping mechanisms.  The majority of them are having to eat bugs.  They are selling off lifesaving livelihood assets, farm implements, kitchen utensils,” said Tomson Phiri, a WFP spokesperson in Geneva.

The hunger and malnutrition is the result of three years of ruined harvests, hampering access to food and affecting people across 10 districts.

WFP has described the situation as “extremely worrying”.

A child undergoes a malnutrition test in Madagascar.

Last month, WFP conducted an assessment in Amboasary, the hardest-hit district, which revealed that three-quarters of children were forced to drop out of school so they could help their families forage for food.

“Most of the women that we spoke to said they had nothing to feed their young children except the red cactus pears that grow on the roadside”, said Mr. Phiri.

As part of its drought response, WFP began life-saving emergency food assistance in September, reaching more than 100,000 people in Amboasary.

Some 576,000 people in the nine other districts are also receiving assistance during the lean season, which runs through December.

Mr. Phiri said given the gravity of the situation, the agency plans to continue scaling up operations through next June.

“We additionally seek to help the challenges that are being faced by rural women, who often are prevented from owning land and agricultural assets, as well as face discriminatory customary practices,” he added.

WFP is appealing to the international community for $37.5 million so it can continue response efforts.