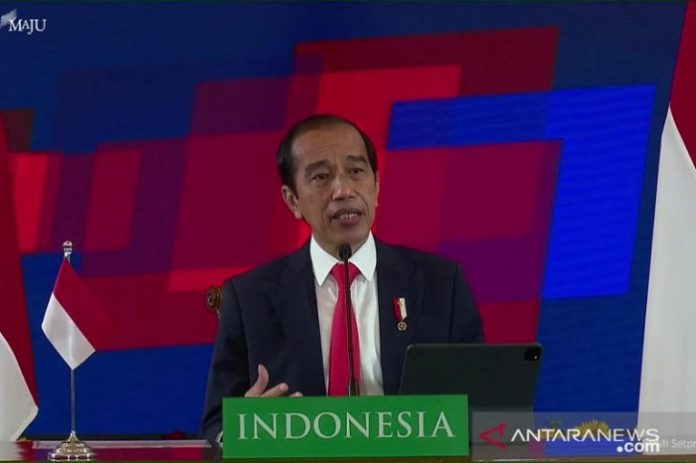 Jakarta (UNA-OIC) – The Indonesian government is preparing a roadmap for the implementation of Making Indonesia 4.0, President Joko Widodo (Jokowi) said, while inviting Germany to partner with Indonesia to bring about a digital transformation in the country.
“I want to invite Germany to establish a partnership in realizing digital transformation in Indonesia. Indonesia is preparing a roadmap for the implementation of Making Indonesia 4.0,” President Jokowi said in his opening remarks at the Hannover Messe 2021 expo, delivered online from the State Palace here on Monday.
He was flanked by Coordinating Minister for Economic Affairs, Airlangga Hartarto, Cabinet Secretary Pramono Anung, Minister of Industry, Agus Gumiwang Kartasasmita, and Minister of Foreign Affairs, Retno Marsudi.
“There are three main things. First, in the industrial era 4.0, strengthening human resources is a necessity,” the President said, pointing out that Indonesia also has a demographic bonus.
“In 2030, the number of productive age (citizens) in Indonesia will double. The challenge is to prepare human resources capable of facing future challenges, challenges of big data, artificial intelligence, the Internet of things,” he observed.
President Jokowi said he believes Germany can support the strengthening of Indonesian human resources through the development of vocational education and the strengthening of research and technology-based universities.
“Second, creating an investment climate that is conducive to Industry 4.0. Improving the investment climate requires structural reforms, the passage of the Job Creation Law is one of them,” he added.
https://en.antaranews.com/news/172278/govt-readying-roadmap-for-making-indonesia-40–president