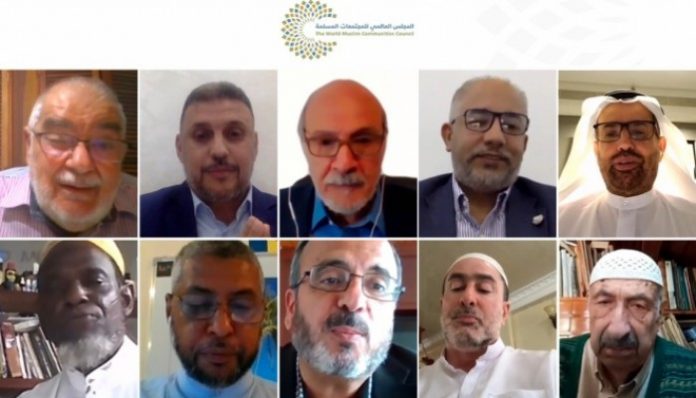 Abu Dhabi (UNA-OIC) – The World Muslim Communities Council (WMCC), in cooperation with the Argentinian-based the Islamic Organization of Latin America and the Caribbean, organized, on 18 October, a virtual conference under the theme “The Role of Islamic Institutions in Achieving Spiritual Peace”, with the participation of scholars, clerics and imams.

In his opening speech to the conference, WMCC Chairman Dr. Ali Rashid Al-Nuaimi said despite the business pressures and challenges of Muslim societies, it is important to achieve spiritual peace for individuals through daily behaviors. He called on Islamic institutions to assume their responsibilities in guiding and caring for Muslims in their societies, in addition to promoting spiritual peace among the youth.

Al-Nuaimi explained that the details of spiritual peace are among the basic issues of individuals in their direct connection with Allah and His Messenger, and the relationship with others within the framework of faith. He called for the need to create programs and initiatives that focus on the spiritual aspect, enhance the sense of peace and love, and achieve the required inner peace, in order to reach the value of the level of perfection (ihsan) in worshiping Allah and adhere to the teachings of the true religion.

WMCC Secretary-General Dr. Mohamed Bachari said that the establishment of the United Nations – as an international system, to prohibit war altogether and achieve international peace and security as an agreed goal and framework – makes the pursuit to terrorize safe people forbidden legally. He affirmed that peace and advocacy for it, as well as spreading its value system in Muslim societies, has become the duty of Islamic institutions today, in order to achieve the overall objectives of Islamic law.

Bachari also underlined that delivering on promises starts with respecting the country’s laws and ensuring social justice by preventing injustice, adding that confronting racism and hatred begins with enhancing loyalty to homelands. He maintained that the task of Islamic institutions today is the continued advocacy for the culture of peace, acquaintance and spreading the values ​​of love and tolerance.

Secretary-General of the Islamic Organization of Latin America and the Caribbean Dr. Sheikh Muhammed Yusuf Hallar underscored that in light of the vacuum that the world suffers from, Islam offers satisfaction, tranquility and solution to all life problems. He also emphasized the need to work with various societies and launch a dialogue with institutions and governments, besides seeking the support of leaders and helping all societies without neglecting Muslim communities.

Hallar stated that they are spreading the message of Islam to reach all people in the region, spelling out that the number of Latin American and Caribbean Muslims is nearly five million including citizens and immigrants. He outlined the challenges of Latin American and Caribbean Muslims in lack of religious knowledge and neglect of religious practices, and the absence of resources for people to learn about Islam in Spanish.

President of the Muslim Cultural Center of Costa Rica Dr. Abdulfatah Sasa gave a historical overview of Islam in the Central American country since 1994. He indicated that there was a single mosque, a school for children, and an imam devoted to teaching children the values ​​of Islam.

Sasa asserted that the Muslim community in Costa Rica has played an important role in society, especially in the health field, and forged excellent relations with local governments and followers of other religions, to spread peace and tolerance. He added that the Muslim community was able to reach Muslims and provide them with aid. They provided assistance to thousands of people in cooperation with the government and engaged with everyone in a sense of brotherhood and love.

Dr. Ahmad Tayel, head of Masjid Abou Bakr Al-Siddiq in Colombia, talked about the basics of dialogue with non-Muslims, namely not focusing on differences but the common points as mentioned in the sacred religious texts. He maintained that our noble Prophet (PBUH) taught us that human beings are brothers and called us to work with others, to remove the manifestations of injustice, inequality and other problems that unite us.

Tayel said that the Muslim community in Colombia cooperates with presidents, organizations, local governments and various stakeholders within institutional programs, noting that they are not focusing on the intellectual side only, but rather on concrete actions to serve humanity as a whole.

It is noteworthy that the World Muslim Communities Council is an international non-governmental organization, headquartered in the UAE capital Abu Dhabi. It is considered a think tank to rationalize organizations and societies working in Muslim societies, renew their thinking and improve their performance in order to achieve one goal; The integration of Muslim societies in their countries, in a way that their members realize the perfection of citizenship and complete affiliation with the Islamic religion.

WMCC seeks, through holding dozens of virtual conferences, seminars and activities, to localize the concepts of religious, ethnic and cultural pluralism, in a manner that preserves human dignity and respect for their beliefs, and establishes the values ​​of moderation, dialogue, tolerance and belonging to the homelands.