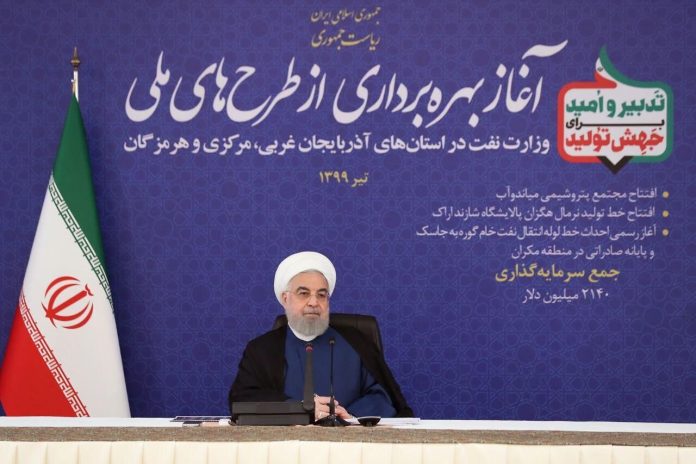 Today, all foreign companies, the United States with its sanctions and the Zionist regime of Israel well know that cannot prevent Iran from progress, the president said at a ceremony on Thursday to open three important oil projects in the country.

The projects include normal hexane production unit of Imam Khomeini Refinery (Shazand)- the first refinery company which started work from the early years of the 1979 Islamic Revolution- in central Iran, Goureh-Jask crude oil pipeline which increases the transport capacity to one million barrels a day on southern Iran and Miandoab petrochemical complex, which will bring 140,000 tons of growth in petrochemical products, on northwest of Iran.

Although sanctions created problems, they also created opportunities for being self-sufficient, the president stated at the ceremony.

About the projects, the president said they are strategic because someday certain regional states tried to create a second way other than Strait of Hormuz in south of Iran to export their oil in critical conditions, and Iran’s oil exports may reach zero if the strategic strait was closed by Iran under any reason.

Last year, President Rouhani had said that Iran is responsible for providing security for the Strait of Hormuz and the Persian Gulf,  and southern Iranian region it is not a place for the United States to get into mischief.

But, today Iran could breeze through the problem by implementation of three oil projects which launched new station for oil exports, the president added.

About Jask region, President Rouhani said it has a bright future and will be turned into an important oil export station in the future.

Sanctions cannot make a halt to Iran’s progress as the Iranian government continues its plans with no delay and will achieve its goals, the president concluded.

Survival of wildlife reserves under threat in Namibia