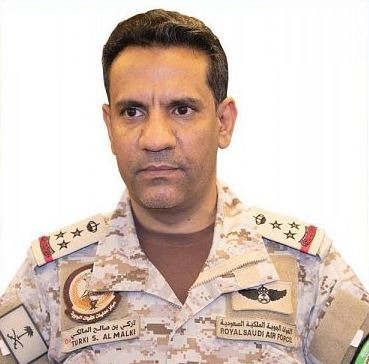 Riyadh (UNA-OIC) – The Royal Saudi Air Defense announced the interception and destruction of four bomb-laden UAVs and five ballistic missiles launched Thursday morning by the terrorist Houthi militia from the Yemeni Governorate of Sa’dah toward Saudi city of Jazan city.

Spokesman for the Coalition to Restore Legitimacy in Yemen Brig. Gen. Turki Al-Malki said in a statement that the terrorist Houthi militia attempted to target a number of civilian objects, protected under International humanitarian law, including an attempt to target Jazan University.

The interception resulted in scattered debris on the university campus, which caused a restricted fire that was contained without any losses to civilian life, he added.

The spokesman described the Houthi attempts to deliberately and systematically target civilians and civil objects, using bomb-laden UAVs and ballistic missiles, as futile and hostile. He pointed out that such acts of hostility amount to war crimes.

“The Joint Forces Command of the Coalition will continue to undertake and implement all operational procedures in order to safeguard civilians and civil objects through neutralizing and destroying threat sources in accordance with the customary international humanitarian law,” Al-Malki stressed.