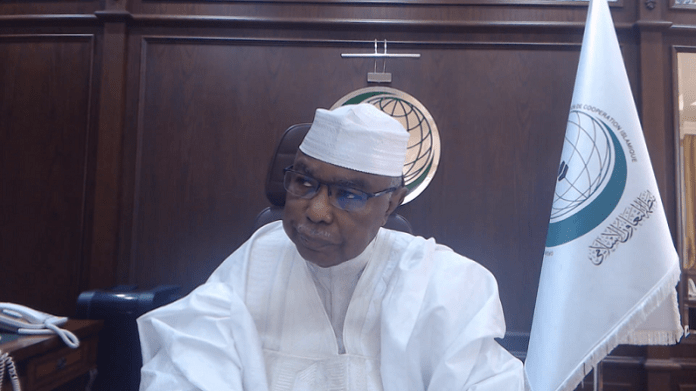 Jeddah (UNA-OIC) – Secretary-General of the Organization of Islamic Cooperation (OIC) Hissein Brahim Taha addressed the Group of Strategic Vision “Russia – Islamic World” meeting, kicked off in Jeddah on Wednesday under the theme “Dialogue and Prospects for Cooperation”.

Held under the patronage of Custodian of the Two Holy Mosques King Salman, Chair of the 14th Islamic Summit, the meeting brought together officials, thinkers, scholars from Russia and the Islamic world.

The OIC chief indicated that the event is an affirmation of the spirit of cooperation between states and peoples through the culture of dialogue rather than alienation, to expand partnership and neutralize exclusionary voices.

He added that the Russian Federation’s interest in relations with the Islamic world and its collective voice – the OIC – is equally met with a genuine interest of the Member States and Muslim communities in non-OIC countries, to continue cooperation and improve cultural and economic links between Russia and the Islamic world.

Taha explained that the theme of the meeting “dialogue and prospects cooperation,” is in tandem with the concerns of both the Russian and Islamic sides in areas of peacekeeping, security, conflict resolution, counter-extremism and terrorism, and sustainable development.

The Secretary-General affirmed that both the Islamic world and Russia can make huge contributions to promoting intercultural and interreligious dialogue, as well as mutual understanding and harmony among different peoples.