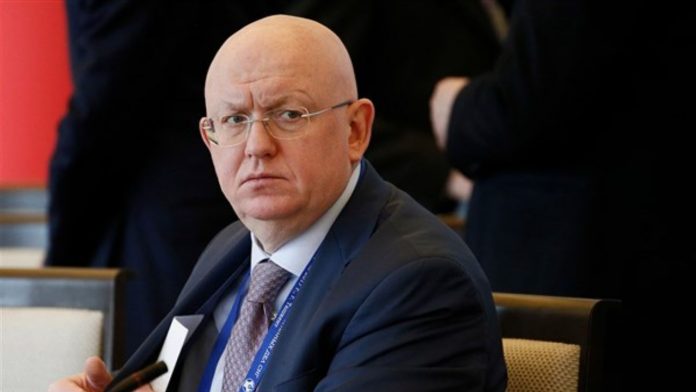 Addressing the virtual meeting of UN Security Council to discuss the UN chief’s ninth report on the implementation of Resolution 2231 on Iran’s nuclear deal, Nebenzya said that unfortunately US Secretary of State Mike Pompeo did not stay to listen to the other countries’ ideas, which is quite understandable due to their current concerns.

He said that the US pays no attention to the other countries’ ideas and imposes unilateral sanctions, so Moscow is worried about the developments regarding Iran and US’ approach toward Tehran.

Nebenzya added that the US measures takes away any motivation from Iran to do its JCPOA commitments; nevertheless, Iran has been loyal to its commitments, while the US threatens another country, which is against the UN Charter.

He also said that the US is pressuring Iran and is seeking regime change in the country and is trying to make breathing impossible for it.

Nebenzya likened the US pressures on Iran to pressing a knee on the neck of a person, which referred to what the US police did to George Floyd, the 46-year-old black man that was killed in Minneapolis, Minnesota.

He went on to say that the US ignored the Resolution 2231 of the UNSC and stopped implementing it, which one can say that Washington has closed all doors behind them and chose maximum pressure on Iran and now is taking about extending arms embargo on Iran, which is a fictitious plan.

The session came amid US efforts to extend arms embargo on Iran which is due to expire in October according to Resolution 2231.