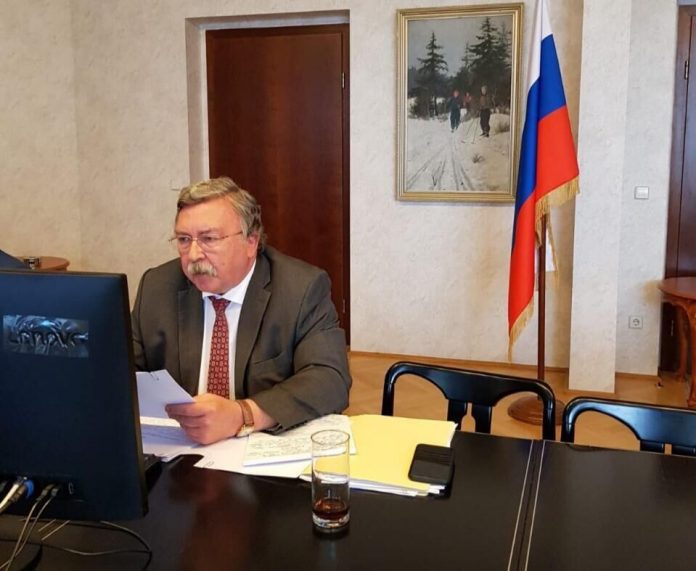 “Seriously concerned by the leaks of the Director General’s confidential report on #Iran,” Ulyanov was quoted by Russian Mission in Vienna as saying in the IAEA Board of Governors meeting which was held online.

“It is unacceptable and it undermines the integrity of the Board,” he added.

“#Russia unwaveringly supports the #JCPOA. The fact that the JCPOA is still alive and #Tehran is courageous enough to continue its implementation demonstrates the unique character of the deal,” he noted.

Elsewhere in his remarks, Ulyanov referred to US Secretary of State Mike Pompeo’s decision to end the sanctions waiver for JCPOA-related projects in Iran, saying “#US decision to end waivers on civil nuclear cooperation projects in #Iran endorsed by resolution 2231 constitutes a challenge to #UN Security Council and Nuclear Non-Proliferation Treaty.”

Earlier, The European Union, France, Germany and the United Kingdom expressed deep regret in a joint statement on Saturday for the US decision to end waivers that allowed countries to cooperate with Iran on civil nuclear projects under the 2015 nuclear deal.

These projects which were endorsed by UN Security Council resolution 2231, serve the non-proliferation interests of all and provide the international community with assurances of the exclusively peaceful and safe nature of Iranian nuclear activities, the statement reads.

The United States ended its participation in the JCPOA in May 2018, restoring all sanctions lifted after the deal was signed in 2015 between Iran and six world powers.

This happened while International Atomic Energy Agency, the sole legitimate body recognized in the deal to verify Iran’s compliance, repeatedly admitted that Iran fully implemented its commitments to the deal.